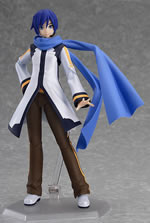 Up for preorder starting today is the new Figma of KAITO by Max Factory, as selected by fans for Good Smile Company’s 10th anniversary product poll. This makes Kaito the 5th Crypton Vocaloid to receive the Figma treatment (now how about Meiko to finish the whole family?).

For accessories, Kaito will come with three different expressions, two different scarf sizes, and an ice cream bar. As a small hidden bonus, he seems capable of holding many various Nendoroid accessories (many of which are ironically perfectly sized for Figmas). So if you have any laying around, go nuts.

Preorders can be made in the usual places (CDJapan, Amiami, Amazon JP, Hobby Search). But those who preorder directly from GSC’s online shop will receive a bonus Nendoroid/Figma clip that allows you to pose your figures from additional surfaces.

Preorders from GSC’s online shop will close on June 12th at 9:00 PM JST, while preorders from other sites will remain open until their limits are reached. Orders are scheduled to ship in September 2013. You can view the official GSC product page here, and view additional images from Mikatan’s blog.

From March 28th until April 23rd, players of Mabinogi will be able to purchase outfits based on several Cryptonloids, as well as win roulette bingo prizes. The events are detailed as such: 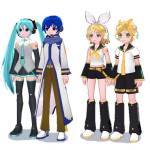 From March 28th to April 23rd, 2013, get the prefix title with your limited Character Card during the sale period. 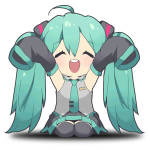 From April 10th to April 23rd, 2013 visit Caravan Joe to start Roulette Bingo! You can get a Game Board by speaking with Caravan Joe. You get one Spin Token every 30 minutes, or by defeating monsters. Depending on where you land, you can get EXP, gold, or even special items! Be careful though! Not every space on the board is a pleasant one. Curious about what items you can win? Check out some of the goodies you can get:

It certainly looks like Mabinogi is about to get a decent upsurge in player traffic.

Starting on January 8th, the Nendoroid Append versions of Kagamine Rin and Len are now available for preorder. Prorders are available directly from Good Smile’s online store until February 6th at 9:00 PM JST.

The two Nendoroids do not come together and must be purchased individually. Both of them include three different expressions, several hand and limb accessories for various poses, and also a special stand that lets you pose both of them together, back-to-back (assuming you have both, of course).

Both Nendoroids can be ordered from Good Smile’s online store for 3500 JPY ($40 USD) each, along with a 2,000 JPY ($23) shipping fee for overseas buyers. The shipping price remains the same with up to five figures, or even if you buy Rin and Len together.

Should you choose to order from Amiami, you can find both Nendoroids (here and here) for only 2,680 JPY ($31 USD) each. However, shipping will vary depending on location and unit count. If you choose to buy just one, this is definitely the cheaper option.

Today is December 27th, which means today marks the 5 year milestone since the release of Kagamine Rin and Len’s software. The second release in Crypton’s Vocaloid2 series of products, they’ve since had an Act 2 release (to fix some quality issues), an Append release, and now an upcoming V3 release.

To celebrate this event, Crypton has released a collection of albums on Karent by 11 different producers. Happy anniversary to the blond haired twins! 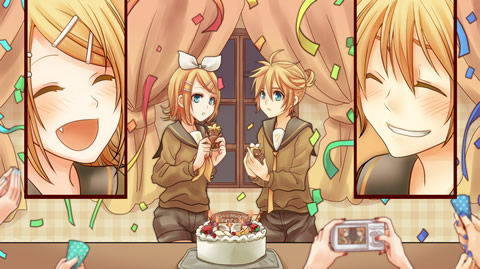 The official Kaito V3 product page is now available with the first official demo of his supposedly finished product. The song, tiled “黄金木の葉が舞う頃に”, makes use of the “Straight” voice bank, which is the voice that represents his “normal” vocal style. Also shown are 3 more voice banks titled Soft, Whisper, and English. Crypton will be uploading a new demo daily until Christmas, so check back regularly for a new demo.

The image of Kaito’s V3 artwork had remained a silhouette from early 2011 until January 1st, 2013. The image has now been revealed, and was drawn by iXima.

The release date is scheduled for February 2013, but there is still no exact date of the release.