As many of you know, the number one source for the latest Hatsune Miku songs and videos always has been and always will be NicoNicoVideo.

With the recent changes on the latest version of nicovideo.jp many users might have noticed that response speeds and buffering times seem to have highly increased.

The reason for this is that the videos are now partly buffered/stores on a different server than before. This server has a much worse route (read: connection) with some of the American Tier-3 providers. This means that no matter of your internet connection, the video will load much, much slower than you might be used to from before.

This problem can be bypassed currently by using a Japanese Proxy, or better a Japanese VPN. Most VPNs are commercial services, but are available over at vpntraffic for as low as $10 for three months. Using a Japanese VPN will make it almost as if you were actually browsing websites from Japan. Your IP will be Japanese and all websites will see you as if you were browsing from Japan directly. Of course the data is still being routed back to wherever you are, but the routing paths with a proxy or VPN are much better than the current default Nicovideo servers.

In our testing the buffering speeds on a popular video at primetime have gone up from 40kB/s to up to 1300kB/s.

For those with more patience, who do not mind watching a video with delays, there is always the option to download a video directly instead of attempting to watch it while buffering. You can use the popular Firefox extension NicoFox to download any video or song from NicoNico to your computer. With NicoFox, you can download videos first and then watch them without interruption from your computer. NicoFox even saves the comments for each video, so you are not missing out on that either.

We hope that these steps help you to enjoy viewing Nico videos without much interruption again. If you know of any other ways to get around the current problems, let us know in the comments below!

I would like to wish everyone a happy new year and hope that you all had enjoyable holidays. Mikufan.com will be looking forward to continue to provide us Miku fans this coming year and I will be doing my best to support Miku and the site as well. To ensure that this new year is a happy one even for the not so fortunate mikufan, I have picked following two songs from Youtube:

For me the year has been a busy one. I regret not having had enough time to actively improve the state of mikufan.com. However, I want give my best this year. The site admin, too, seems to be busy, nevertheless I encourage you to visit the site once in the while in case everything gets running again… 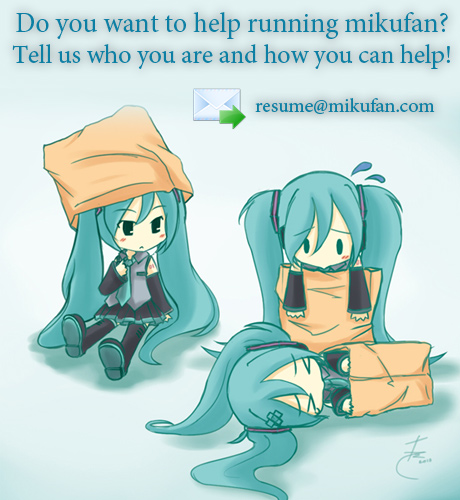 It has been a long while since this site has been last updated. There is a long story behind this, but let’s make it short! In a nutshell: The original owner of the domain has disappeared and does not seem to be having any plans of returning to this project. Therefore the domain is now under new ownership. Things have been cleaned up, updated and everything is online and running again.

By now Hatsune Miku has grown into such a popular and widespread character that running this site alone can be quite a big task. With the site back online, we are looking to get things running and keep you guys updated about the latest Hatsune Miku news as soon as possible. This is exactly where we need some help. Are you a hardcore Hatsune Miku fan? Do you keep up-to-date with Miku related news and gossip? If you think you got what it takes to write news for us, get in touch!

During the next few weeks we will be opening a Hatsune Miku fan forum. We will be looking for some moderators as well!

If you are interested, please get in touch and send a few lines about who you are and how you can help to the email address shown in the picture above.

If you are reading this it means that the server move was a success and your dns has already refreshed. Welcome back! Other than that we also upgraded to WordPress 2.6. If you notice any strange bugs, missing posts, dead links or double posts, please get in touch at info@[nospam]mikufan.com! Obviously you will have to remove the nospam part.

While this is not really related to Hatsune Miku, it’s still something that will hurt most of us pretty bad. Nico Nico Douga is about to remove all fanmade anime related videos. CNET Japan reported that Nico Nico Douga agreed with the AJA (The Association of Japanese Animations), Japan Video Software Association (JVA) and Motion Picture Producers Association of Japan (MPPA) to remove all copyrighted videos belonging to members of these organizations. This includes all fanmade videos (MAD videos, redubs, loops, etc.) and anime episodes in general.

Via Canned Dogs (head over there for more infos)