In collaboration with Crypton Future Media, Crunchyroll will be giving away a pair of Miku Expo tickets to either Los Angeles or New York, along with two Hatsune Miku grab bags full of goods.

“Sharing the World” by BIGHEAD ft. Hatsune Miku is the main theme song for Hatsune Miku’s upcoming MIKU EXPO 2014 in Los Angeles & New York, and was composed and recorded especially for the event.

It’s a song about reaching out to each other through creation, with Hatsune Miku bringing together people all over the world in a common feeling of positivity.

Share your world, your experiences and creativity, and let’s all make a music video for “Sharing the World”!”

To participate, record a video 30 seconds or less of you (or you and friends) drawing, cosplaying, having fun, or being creative in any way to “Sharing the World”! Upload the video to YouTube, then post it on the Crunchyroll forum thread.

The first prize winner will receive a pair of concert tickets to their choice of Miku Expo in Los Angeles (October 11th~12th) or New York (October 17th~18th). The second and 3rd place winners will each receive a Hatsune Miku goodie bag.

But you must be quick, as the contest will end on September 19th at 5:00 PM PST! The winners will be announced on September 26th.

Additionally, Crunchyroll has exclusive footage of Miku Expo in Indonesia available for viewing on their site with over 30 minutes of concert event footage. The event-exclusive Indonesian song “Venus di Ujung Jari” is also included. The video is available to free users until September 14th, and will be available to Crunchyroll premium members after that date. Enjoy! 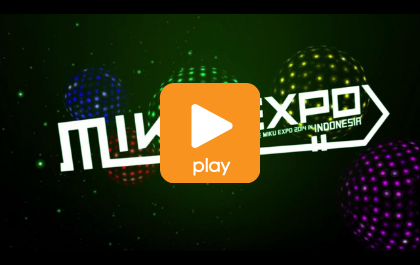