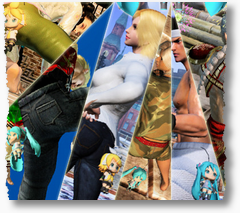 It was just brought to my attention that Hatsune Miku, Kagamine Rin and Kagamine Len apparently are included in Sega’s arcade smash hit Virtua Fighter 5 R since a few days.

But don’t get your hopes up too high – you still can’t let Miku fight against Rin and Len to see who really is the better Vocaloid singer. Instead, players of the arcade game now get the chance to win a virtual Nendoroid figure to decorate their character with.

While the game has been receiving updates since the debut release in mid 2006, this is probably one of the most surprising ones! Hatsune Miku is still incredibly popular and as some of you might know has already appeared in a few other games such as the Korean online golf game Pangya and 13 Sai no Hello Work on the Nintendo DS.

Via Japanator with thanks to Aku for pointing this out!