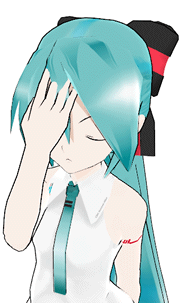 After observing the community for a while after the incident back in February, I am appalled to find that somehow people are STILL talking about this. I have absolutely no idea why, and it’s also nothing short of disappointing.

Basically, here’s what you SHOULD be spreading around. The problem with video deletions had been solved by Google and Crypton over two months ago, and they even confirmed that the Koreans had nothing to do with it. Oh, and those “Justin Bieber is jealous” jokes aren’t funny. The videos stopped disappearing a long time ago, yet people are still spreading it for some reason.

This leads me to believe that the problem is stemming from all of the new fans who have no idea that the situation was handled a long time ago. So we as a community need to spread the news that there is no longer a problem. Crypton is a powerful company with many powerful partners (such as Google), and they’re perfectly capable of taking care of themselves. They don’t need an army. As fans, we don’t need to do anything more than observe from the sidelines.

Part of this problem stems way back from the TopTens voting incident, when Miku was removed from the list. Long story short, I was the one who convinced the admins to add her back to the page. You can read more about that in the description of the video I posted here: http://youtu.be/m1Xc5kdiTeo

Because of that, she was able to achieve rank #1. People then assumed the Koreans were responsible for the video deletions because their K-Pop idols lost their spot to Hatsune Miku. This, of course, is false. People need to stop spreading this rumor.

So please do your part and help spread this news around so people can stop already. Thank you.

EDIT: It’s nearly 24 hours later, and nearly 10,000 shares. Wow. I did not expect that. I’d like to thank the admins of the Vocaloid fanpage on facebook for the mention, and of course to all the fans who listened.