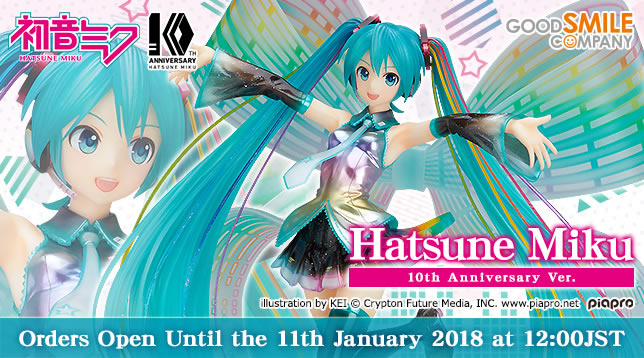 The Hatsune Miku 10th Anniversary ver. 1/7 scale figure with its beautiful design and stunning colors is now available for preorder! Additionally, there is a special Memorial edition available, which will include a large A4 size commemorative book called the “Hatsune Miku Archive”, which will include the winners of the Pixiv Hatsune Miku 10th Anniversary illustration contest as well as other contents to look back on Miku’s 10th anniversary.

Celebrating 10 years of Hatsune Miku!
Hatsune Miku celebrated her 10th anniversary on the 31st August 2017. In commemoration of the anniversary, Hatsune Miku’s character designer KEI illustrated a brand new illustration of Miku featuring the outfit designed by manga artist Mari Shimazaki. This illustration has now been transformed into an intricate scale figure by sculptor Takayuki Kawahara, filled with 10 years of appreciation towards the virtual idol!

The lovely scale figure is available from Good Smile Company’s online shop for 20,000 Yen (177 USD) for the regular edition, and 25,000 for the Memorial edition, with preorders open until January 11th 2018. She’s scheduled to ship around December 2018. You can also find her available from these other online shops!

Check out the full photo review from Kahotan’s blog! → http://mikatan.goodsmile.info/en/2017/11/09/hatsune-miku-10th-anniversary-ver/ 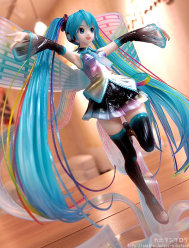 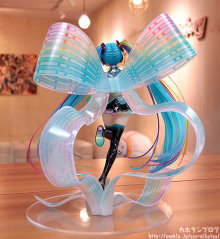