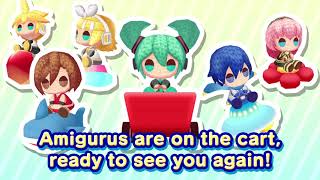 The game features the Piapro Characters Hatsune Miku, Kagamine Rin & Len, Megurine Luka, MEIKO and KAITO as adorable hand-stitched plushies, or “Amigurumi”, that race along on various styled “carts”. You play the game simply by swiping left or right to move your character through the race track to collect useful items and avoid obstacles.

You’ll level up and collect new amigurumi and carts as you play. There’s 27 character styles and 36 carts in total to collect. Rabbit Yukine might also make an appearance in the game!

Crypton Future Media’s game development staff says they’ve made the game style to be over-the-top cute in style, and easy and fun to play. Feel free to give it a try when you have the time!