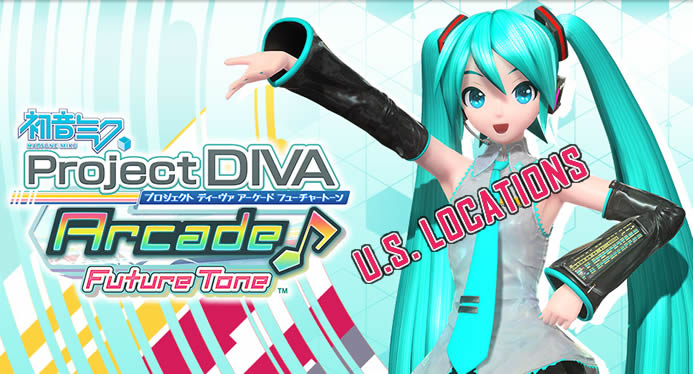 Many Hatsune Miku fans in the U.S. have not been able to see what the real Hatsune Miku: Project Diva Arcade Future Tone experience can be like, because it’s not know where all the units are installed across the country. And while we have had a port of Future Tone make its way to the PlayStation 4, it still doesn’t quite feel the same (and is even harder!). Those 4 big buttons and slider on the actual arcade game feel a lot more exciting, and should be experienced in person.

The list of Project Diva Arcade locations in the U.S. have been hidden away on the Chinese version of the Project Diva AC website, but now fans in the U.S. can check out these locations! Or if you live in Taiwan, Hong Kong, Singapore, Korea, Macau, or Thailand, you can also visit the locations listed here: http://miku.sega.jp/arcade/tw/location.html (Note that locations may have been removed or added at any time, and not reflected in site updates)

Hatsune Miku: Project DIVA Future Tone is the largest Hatsune Miku game yet with over 200+ songs and 300+ modules, but if that’s not enough for you Sega has released the first DLC adding a total of 4 new songs to the game with more to follow.

Alternatively, there’s a Season Pass DLC available on PSN which includes the entire packs at a price of $24.99, as well as free avatar set of 40 PlayStation Network avatars. (US PS Store / EU PS Store)

Below is a list of songs, modules, accessories, and EX Charts for the 1st Encore Pack.


Get ready to sing and dance with your favorite digital singer and her friends all night long, because the rhythm game Hatsune Miku: Project DIVA Future Tone is now available in the Americas and Europe! A PlayStation®Network exclusive, it kicks off with a bang by giving players 200+ songs for Miku and her digital friends to perform. Newcomers and veterans alike will have new controls to master, and tons of customization thanks an unparalleled amount of costume modules to unlock, including throwbacks to classic SEGA titles – from Sonic and Virtua Fighter, to Valkyria Chronicles and Space Channel 5! 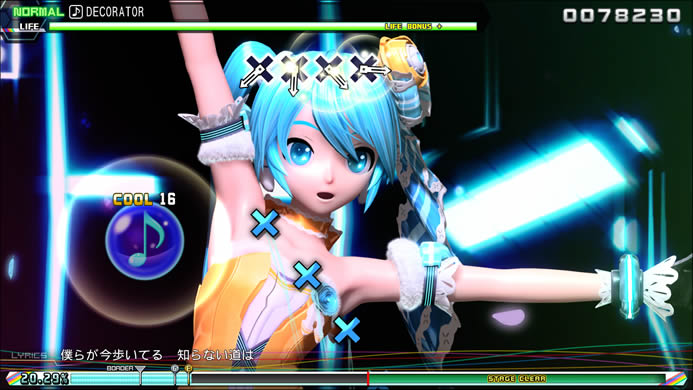 According to news via hokanko-alt and Gematsu, the latest Weekly Famitsu has confirmed that the PlayStation 4 release of Hatsune Miku: Project Diva Future Tone will take place in Japan on June 23rd via the PlayStation network.

The main application needed to launch the game, “Prelude”, will be available for free download. However, adding playable songs and modules will require purchasing one (or both) of the following music packs for 4,212 Yen each: “Future Sound” with 120 songs and a focus on Project Diva and Project Diva F series music selection, and “Colorful Tone” with 100 songs and a focus on Project Mirai and Project Diva Arcade music selection. Combined, the two packs also have 340 modules (costumes). More details in our past article.

This means for 8424 Yen ($78), you get practically the entire Project Diva Arcade Future Tone music selection with enhanced visuals over the arcade counterpart. Not bad at all! Preorders start this month, and early bird buyers will be entitled to two PS4 themes as a bonus. Keep in mind the game is available only via the Japanese PlayStation network!

The first photo shows the song Electro Saturator by Tilt-Six highlighted, while the song counter in the lower left corner of the screen shows “213 songs”. The last photo amusingly shows the SEGA staff member losing the stage on normal difficulty.