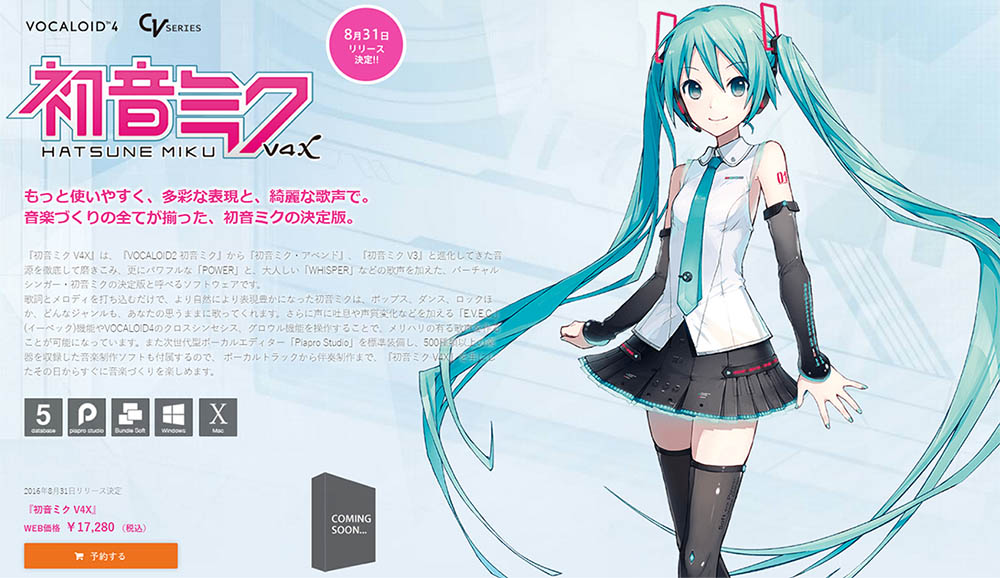 The Hatsune Miku V4X special pages are finally here, and show a stunning main visual by iXima! The software is available in Japanese, English, or the two voicebanks together in a bundle, and will be released in physical and digital copies for Windows and Mac OS.

An easier to use, even more expressive and beautiful singing voice. The definitive edition of “HATSUNE MIKU”, with everything you need for music creation.

A “HATSUNE MIKU” more natural and more expressive than ever can sing any kind of genre like pops, dance, rock, etc. by just typing down the lyrics and melody. Also, you can achieve a rich singing voice by using the E.V.E.C. function, breath effects and VOCALOID4 engine’s Cross Synthesis and growl functions. And this product includes next-generation vocal editor “Piapro Studio” and a music creation software with over 500 instruments, so you can start creating music the day you purchase “HATSUNE MIKU V4X”.

The voice library that can sing in English with authentic “HATSUNE MIKU” voice samples.

“HATSUNE MIKU V4 ENGLISH” is a virtual singer that can sing English lyrics with a beautiful and innocent voice, carefully re-recorded to be truthful to the voice expressions and cuteness characteristic of “HATSUNE MIKU”. VOCALOID4’s growl function, pitch snap function and pitch rendering function give even more choice of expressions.

Hatsune Miku V4X, Hatsune Miku V4X bundle, and Hatsune Miku V4 ENGLISH are scheduled for release on August 31st, the same day as her 9th anniversary. Below are lists of links to the aforementioned software, with Japanese and English web descriptions for physical and digital releases, respectively.

The featured tracks will be coming soon. Stay tuned!

Note: Users who own KAITO V3 or MEIKO V3 will have their Piapro Studio updated from VOCALOID3 engine to VOCALOID4 engine upon Hatsune Miku V4X installation.