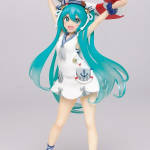 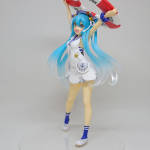 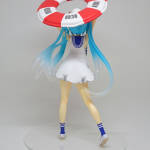 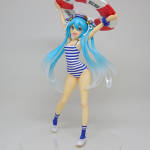 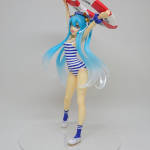 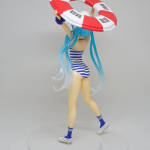 Taito’s newly announced Hatsune Miku prize figure, the Hatsune Miku Original Summer Dress Ver. Non-Scale Figure, can now be ordered online! Usually you would have to try your luck at arcades within Japan to win such prize figures, but recently direct sales have become more popular as worldwide interest in these figures grew. Prize figures have been increasing in quality, while remaining relatively inexpensive.

Our partners at Tokyo Otaku Mode are offering a chance to reserve yours before she’s unleashed at the arcades in Japan this August! She’s priced at $14.99 USD, with a scheduled release of December 2017 (4 months after Japan release). Please note the figure ships only to the United States and Canada.

Based on an illustration by Naoki Saito, the Original Summer Dress Ver. of this figure has the beloved Vocaloid in a cute white dress featuring gray and blue sailor uniform details as she holds an eye-catching lifesaver above her~ The semi-transparency of her hair towards the ends adds a nice touch, too, along with the ever-so-slightly visible swimsuit on the inside of her dress.

She reaches a height of 7.1” and comes pre-painted and ready for display~

A secret detail of this figure that others were quick to hush is that this figure is also the castoff variety, allowing you to display Hatsune Miku in her swimsuit if you choose! Cute! (〃ω〃)