Before we begin, we would like to congratulate Black Falcon for finishing 3rd place overall with the #4 Promare car and 3rd place in the Silver Class (24th overall) with the #6 Miku car at the 24 Hours of Spa-Francorchamps back in July. Unfortunately for Goodsmile Racing and TYPE-MOON, the #00 Fate car retired halfway into the race when they collided at the high-speed turn of Blanchimont.

Now back to Super GT. The #4 Hatsune Miku Mercedes-AMG GT3 qualified in 9th position for the start of the race which would start off fine for the first hour until the pit stop strategies came into play with teams using different tyre strategies with some teams opting not to change tyres on their first pit stop. The team managed to climb up to 3rd position overtaking the #7 D’Station Aston Martin Vantage GT3 in the process before their second pit stop.

The Safety Car came out on Lap 69 when the #38 ZENT Lexus LC500 crashed due to a loose wheel nut shortly after their pit stop forcing them to retire from the race. Things would calm down as the race restarted until the Safety Car was pulled out once again on the 104th lap, this time for the #24 Realize GT-R GT500 pulling over at the pit entry due to an engine failure which would then catch on fire. The #4 Miku AMG were lucky enough to pit before they closed the pit lane when the Safety Car came out.

Once again, the race restarts and teams would stop for their fourth and final mandatory pit stop mixing up the field for the last time until more drama unfolds with the #25 Hoppy 86 MC colliding with the #22 R’Qs AMG forcing Hoppy to retire from the race. As the race was at it’s closing stages a timer appeared finishing the race earlier rather than racing the full length of 177 laps. With less than 2 minutes until the end of the race, the #4 Miku AMG overtook the #61 Subaru BRZ placing them in 8th position until the end of the race.

The race would finish on the 175th lap with the #6 WAKO’S LC500 winning in GT500 and the #87 T-Dash Lamborghini Huracan GT3 in GT300. We would like to congratulate both teams on their victory in Super GT’s endurance round of the season.

Goodsmile Racing still stands 11th in the championship standing despite the pace they had during the race, only the timing of the pit stops, and safety cars compromised their position.

The next race will take place at Autopolis on the 7th and 8th of September. But before that is the 10 Hours of Suzuka happening from the 23rd to the 25th of August with Kamui Kobayashi returning as the team’s third driver for the race. Once again, we wish the team good luck for the upcoming endurance race. Fight, GSR!

Last weekend was Round 4 of SUPER GT, which took place at the Chang International circuit at Buriram in Thailand. Goodsmile Racing finished 8th in qualifying for the start of the race the following day.

The race started off clean with all the cars making it through without colliding into each other. Things were calm until teams started to do their pit stops. The #4 Hatsune Miku AMG would stay out as other teams pitted. But suddenly the #16 Motul Mugen NSX-GT, #8 ARTA NSX-GT and #1 Raybrig NSX-GT in the GT500 category all collided bringing the Safety Car out which would compromise the #4 Miku AMG, as they have yet to make their mandatory pit stop. And by the rules, the pit lane is closed during the Safety Car.

As the race restarted, the team would eventually pit for a driver change and refuel but kept the same tires. The #4 Miku AMG would leave the pit lane in 14th place. In the end the team would cross the finish line in 13th, overtaking the #7 D’station Aston Martin Vantage as they suffered a blown tire during the closing stages of the race. The team went up to 12th as the #21 Hitotsuyama Audi dropped position, possibly for failing post-race inspections.

Goodsmile Racing now stands 11th in the championship standing. We may only be halfway through the season, but the team still has a chance in fighting for the championship. The next race will be at Fuji International Speedway on the 3rd and 4th of August for the endurance round of the season. Fight, GSR! 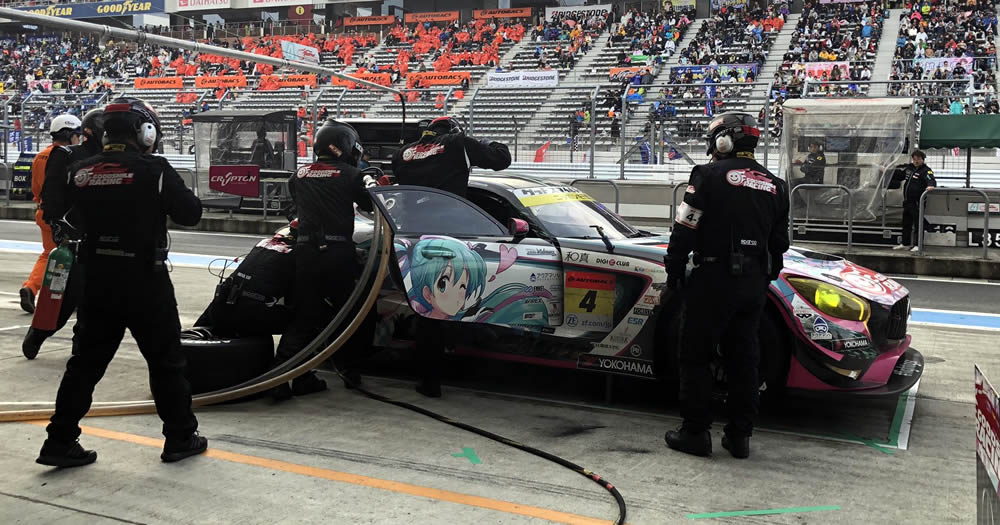 We got surprisingly close to another race potentially being cancelled due to heavy rain, but the 2nd round of SUPER GT 2019 at Fuji Speedway on May 4th was able to come to a close with Goodsmile Racing placing 6th! The final minutes of the race was a tough battle for driver TK, who managed to steal back the 6th place position from #33 (a Nissan GT-R) at the last minute. That brings our team’s score to 12.5 points so far for this season, with a 7th place overall team rank.

Round 3 will be at Suzuka on May 25th~26th. Hopefully the weather will be more kind at the next race! Fight, GSR! 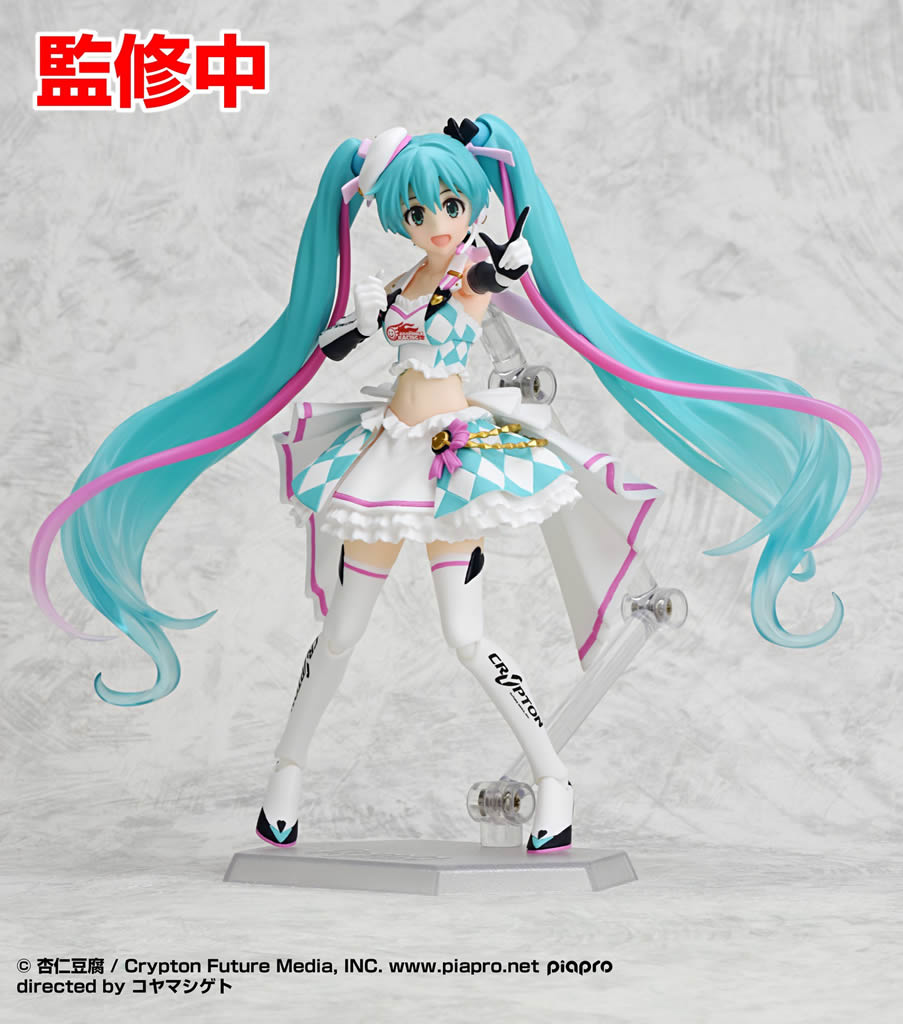 Goodsmile Racing also released the first image of the Figma Racing Miku 2019 fully painted! Additionally, GSR has announced that individual item sales of the Figma will be made available sometime soon. If you’d like to obtain the Figma along with additional benefits, the personal sponsors courses are also available! 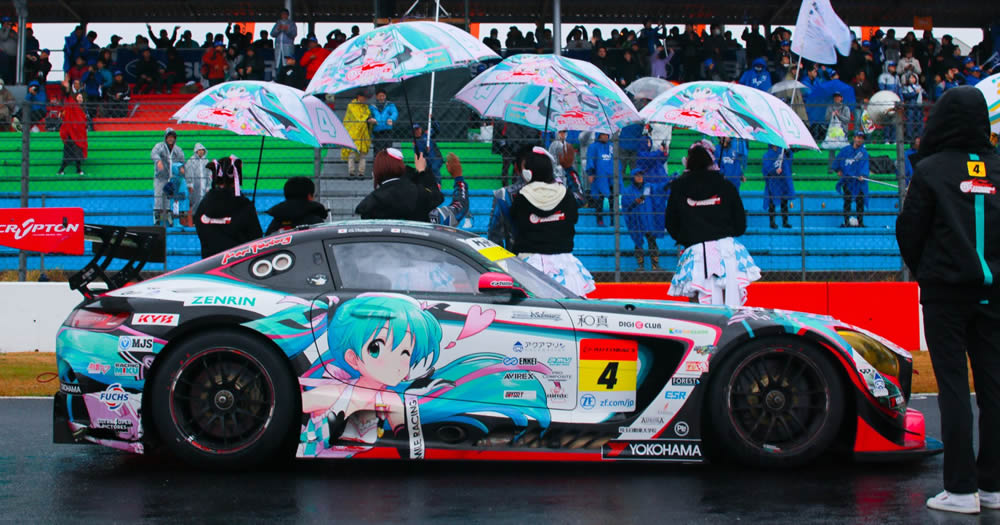 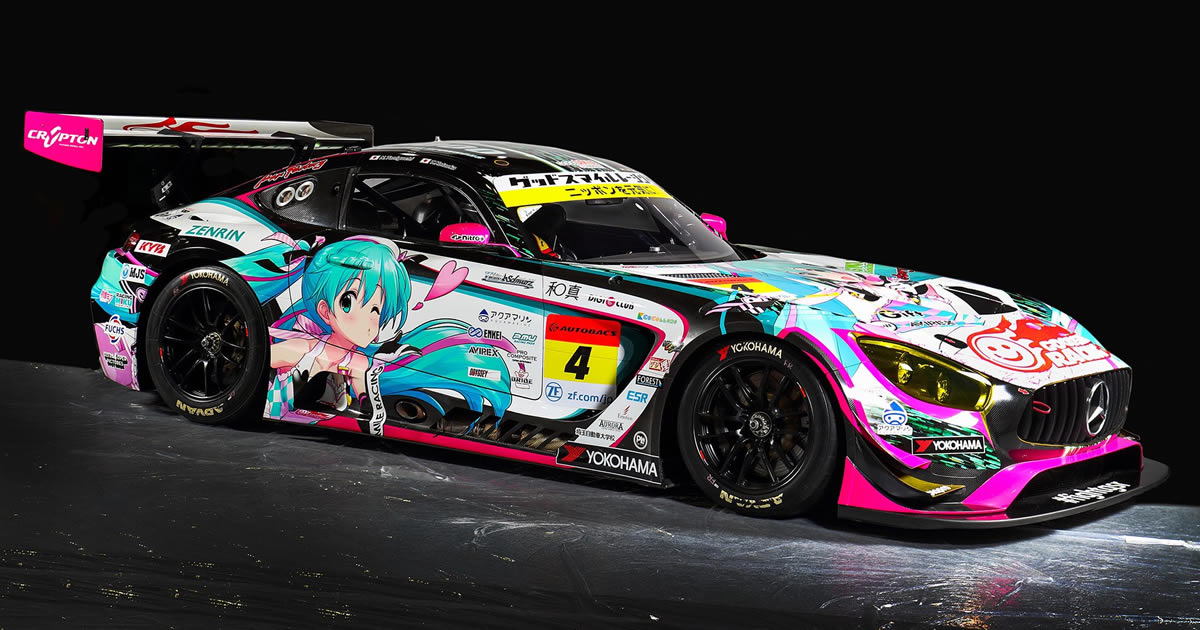 Goodsmile Racing has finally announced the design for their 2019 Race Machine for competing in SUPER GT! The itasha-styled car is fully covered with this year’s Racing Miku 2019 artwork by Annin Oiko, and it looks stunning as usual! We can’t wait to see this one on the race track.

Let’s show our support to GSR once again this year! If you’d like to pledge your support as a personal sponsor, applications are now open! Details here → https://www.mikufan.com/goodsmile-racing-sponsor-courses-now-open-for-2019-racing-season/