Goodsmile Racing finishes in 4th place after a chaotic dry and wet race at Autopolis with the #4 Hatsune Miku AMG GT3 qualifying in 6th place the day before, only to climb up one more position as the #33 EVA Nissan GT-R GT3 got a grid penalty forcing them to start in 7th.

The race started off with the #4 Miku AMG overtaking the #7 D’Station Aston Martin at the at the start of the race. With just 3 laps into the race the safety car was deployed due to the #1 Raybrig NSX-GT crashing into the barriers forcing them to retire and possibly ending their chances for a second championship for the team in GT500 which saw 2009 Formula One champion Jenson Button and his teammate Naoki Yamamoto take the championship last year.

The reason for the safety car. Naoki Yamamoto is OK and out of the car. #supergt pic.twitter.com/nj7mfjCe3r

The race would restart with the #61 Subaru BRZ returning to the garage due to gearbox problems making way for the #4 Miku AMG to fight for the lead with the #25 Hoppy 86 MC and the #52 Toyota Mark X MC, which would end up with Hoppy losing the battle and placing the Mark X and Miku AMG in first and second respectively.

The lead of the race in the GT300 category would change with the #4 Miku AMG overtaking the #52 Mark X and gradually widening the gap giving the team a slight advantage for the time being.

That gap would then be gone for nothing as Fuji 500 miles’ GT300 winner the #87 T-Dash Lamborghini Huracan GT3 stops in the middle of the track. Fearing that a safety car would be deployed because the pitlane closes during the safety car, several teams opted to pit in to change to wet weather tyres as rain started approaching towards the circuit. This also caused havoc in the pitlane with cars not being able to stop parallel with the pitlane and even un-safe releases causing collisions with cars leaving the pitlane.

While the chaos was happening at the pitlane, meanwhile on the track the #22 RQ’s AMG spins out crashing into the barriers as it struggled for grip on the wet track with their dry slick tyres putting them out of the race. Sooner or later the race would restart only to be deployed shortly after a few laps later as the #9 Pacific Mirai Akari Porsche spins out into the gravel but was able to recover in the end. The #360 RunUp GT-R also spun during the safety car taking out one of the cameras with it.

Eventually the race would restart with teams either racing with dry slick tyres or wet weather tyres. Mixing up the field as parts of the track were both wet and dry. As the race was reaching its closing stages, the lead of the GT300 category was still up for grabs with the #720 McLaren 720 GT3 taking the lead from the #88 Manepa Lamborghini. But suddenly from out of no where was the #60 Syntium Lexus RC F GT3 charging in snatching the lead as the one of the only teams to stay on the dry slick tyres throughout the whole race which would see them take victory in the GT300 category. Meanwhile further behind the #4 Miku AMG was still fighting for position overtaking the #96 K-Tunes Lexus on the final lap placing the team in 4th place until the checkered flag. That gave Nobuteru Taniguchi a cheeky expression.

Congratulations to the #39 Denso Lexus LC500 and the #60 Syntium Lexus for winning at Autopolis. Goodsmile Racing now stands 7th in the championship. With only two rounds to go and 15 points behind the leading team, the #55 ARTA NSX GT3. Goodsmile can still fight for the championship but the chances are very slim. 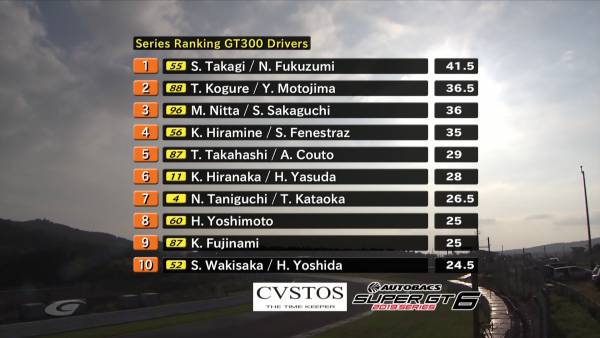 The next race will be on the 21st and 22nd of September at Sportsland Sugo. Until then. Fight, GSR!