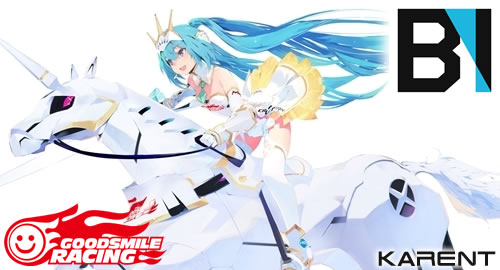 A recent album release update on KarenT, Crypton Future Media’s own record label, has announced the upcoming release of “Gallop Through the World” by BIGHEAD, featuring Hatsune Miku V2 and Miku V3 English. BIGHEAD is well known as the composer for “Sharing The World“, the theme song for Miku Expo 2014 in LA & New York.

The song and album will be Good Smile Racing’s team theme for the 2015 Super GT race season, and is scheduled to release on KarenT and iTunes (and possibly Amazon MP3) on March 13th with a price of 900 Yen, or $5.94 USD. It will feature 6 tracks, which includes the main song, along with various mixes and instrumental versions.