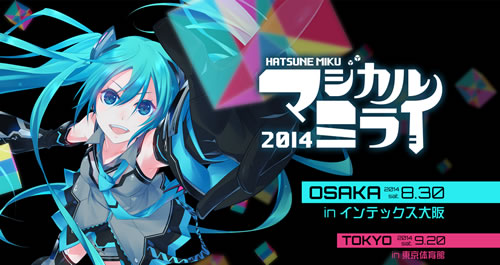 Crypton Future Media has recently announced the “Hatsune Miku: Magical Mirai 2014 in Osaka” concert album for digital release on iTunes via their own record label, KarenT. Priced at $11.99 USD, the album contains the full concert setlist to reproduce the arrangement of the live concert event.

The track “Wonderland and the Sheep’s Song” by Hachi, however, has been excluded from the album for unknown reasons. All copies of the physical album also appear to have completely sold out online (sorry to be the bearer of bad news!).

As a reminder, the Magical Mirai 2014 blu-ray concert sets (regular and limited) are still availble for order, and are scheduled to ship on March 11th, 2015. Details and available sources can be found here: https://www.mikufan.com/?p=9655

Below is official concert footage of Magical Mirai 2014 in Osaka from the official Hatsune Miku YouTube channel (blu-ray footage should be much better).