Many fans worldwide watched last summer’s Yokohama arena concert in celebration of Hatsune Miku’s 6th anniversary. It was truly a magical event that awed its viewers with a fresh song lineup, and plenty of emotional moments. Magical Mirai was the largest, and considered by many to be one of the best Vocaloid concerts. Now fans can immortalize the memories with the announcement of the Magical Mirai concert DVD and Blu-ray sets.

Three different versions of the set have been announced so far, although I imagine we might see additional special packages announced at a slightly later date. So don’t jump on this too early! All concert sets listed below are currently scheduled for a February 2014 release. 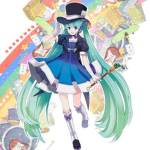 The first is the basic DVD set that contains the full 24 song performance, with no additional bells and whistles. As a note, this is a Region 2 encoded DVD, so fans outside of Japan may have difficulty playing this disk without a converted DVD drive, or an unlocked DVD player.

There is currently no official image of the package design. Expect it to be revealed at a later date. 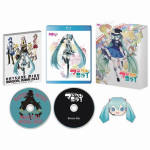 The limited edition of the DVD set comes with a number of extra bonuses. The first is the 3-sided box with illustrative art by CHRIS, while the second is the disk Jacket with art by KEI.

The third is a bonus video disk containing 30 minutes of footage to introduce fans to Magical Mirai and the various events that took place at the venue. The fourth is a 50 page pamphlet that recreates the same booklet that was given to live attendees of the event.

The last bonus is a package of the Hatsune Miku origami set that was a popular item from the Magical Mirai workshops. As a reminder, this DVD set contains the same region restrictions as the regular DVD package.

The limited edition DVD set borrows the same image as the Blu-ray set, as there is not yet an official image for the DVD package.

The last announced set is the Blu-ray version, which conveniently comes coded region-free. It includes all of the bonuses detailed in the limited edition DVD version, but in full HD resolution.

It has been noted that the mentioned bonuses and package designs may change at later dates as the details are more finalized. Keep this in mind before placing an order.