This news report hits a bit closer to home for me, since I live inside the Coachella Valley area of Southern California. And I was sure surprised when I heard news that Hatsune Miku made a brief appearance on stage at the Coachella Music Festival last Friday! Simply dubbed “Coachella”, the event is one of the largest music festivals in the world, drawing artist and visitors from all over. 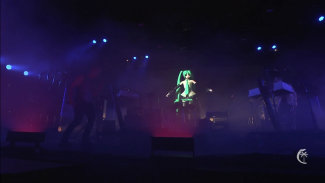 Miku’s appearance was made in the form of some video jockey (VJ) clips on the large glass screen behind the music group DREAMS (images above) on the evening of April 13th. While the music group is new, the members are not new to music. One member, for example, is Daniel Johns from Silverchair, a 90s music group.

There’s also a recording of Miku’s brief appearance in the tweet below. What do you guys think of the idea of Miku making an actual performance appearance at the Coachella Music Festival in the future?