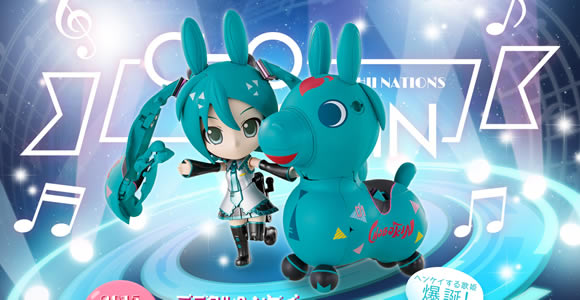 A press release from BANDAI earlier today has announced a new Hatsune Miku x Rody poseable figure. In their collaboration with Crypton Future Media, however, BANDAI has created something a little different and unique. The figure is not only able to transform between Miku and Rody, but it’s also part of BANDAI’s “chokogin” premium series of poseable figures, with included accessories.

On the Miku side of things, she appears very much like a nendoroid figure, and is similarly sized (only half a centimeter taller). In a process not yet fully revealed, you are able to collapse and transform the figure into “Rody”, a popular French toy horse series now owned by BANDAI. They’ve had previous collaborations with “Hello Kitty” and “Neon Genesis Evangelion”, although not in a transforming design.

The figure is priced at 7344 Yen, and is scheduled to become available October 24th, 2015. Accessories included are at least two changeable faceplates, negis, and a display stand with a keyboard. Orders within Japan will likely be taken from BANDAI’s online shop, as per usual. A few other online retailers, such as CDJapan, Amiami and Hobby Search, will be offering overseas availability. 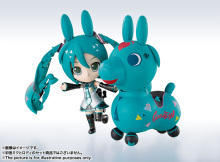 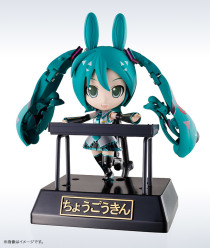 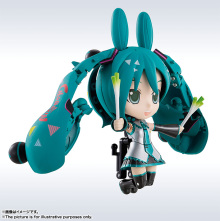