In recent smaller news, nendoroid.jp has launched an English version of their website, nendoroid.jp/en/. Since many products are now becoming available for international shipping, this should make your product browsing experience much easier. Thank you very much to salanos for the tip!

This next blip of news doesn’t have a whole lot of information yet, but word states that a Project Diva F booth was spotted at E3, the Electronics Entertainment Expo, on Monday, June 4th. It’s unsure as to why a PjD F booth was even seen at a North American electronics show in the first place. There is a lot to speculate on that (as exciting as it is), but for now I’ll stick with what is known.

EDIT: Hatsune Miku’s facebook page has confirmed there is a booth, SEGA has also announced via twitter that a booth is set up with a PjD F tech demo. Here is the tweet: E3 2012：Sony Computer Entertainment America（SCEA）ブースにで「初音ミク -Project DIVA- f」出展決定！（Tech Demo）リズムゲームは日本語のままの出展ですが明日からの現地の反応が楽しみでございます！（2号）. Translation: A tech demo booth is set up with the game, but it’s still in Japanese(?). They’re excited to see the surprised reactions from fans touring the expo.

EDIT 2: Hatsune Miku’s facebook has posted several images of the demo booth. Do I need to even mention how jealous I am of the people who got to play this? There was two songs available: World’s End Dance Hall and Cat Food. Click the thumbnail to see the full version. The new product art and packaging for the limited edition bundle has been revealed. It appears there will be two different types of box art. The normal release will have Miku placed on the right on the cover with a polychromatic background, while the limited bundled release will have Miku positioned on the left with decorative button faces in color. It will also include two neat artistic extras. One is a protective cover for the PS Vita, with the second being the AR (augmented reality) card.

Once again, the bundle will include the limited edition Crystal White Hatsune Miku PS Vita, a 4GB memory card, and a copy of Project Diva F with a slightly different box art. Thank you to gematsu for the info! 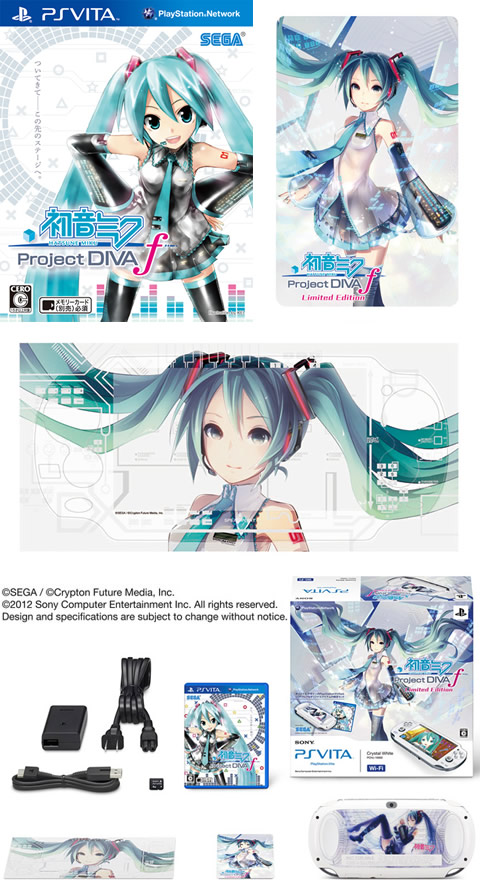