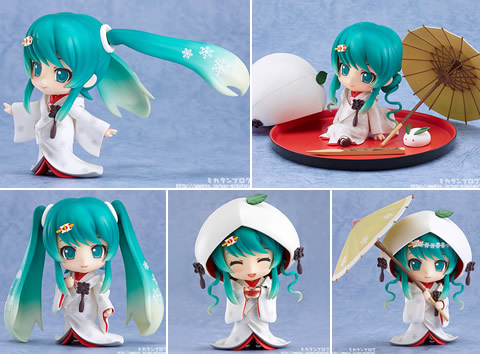 Well, that didn’t take long. Just a few hours after my previous post, now we have official images from Mikatan’s blog of the 2013 Snow Miku Nendoroid.

From what’s visible, the nendoroid includes two different hair styles, at least three different expressions, and a removable hood for her kimono outfit. Also shown is an umbrella and even a few accessories to allow a sitting position. There is currently no announced pre-order date or pricing, but we likely wont see that information for at least a couple months.

Also announced is the Snow Miku 2013 module update for Project Diva Arcade in both hooded and non-hooded forms. There is also a DLC module announced for Project Diva f on the PS Vita, but there is still no confirmed release date or price.

Head over to Mikatan’s blog for the full set of full size images!