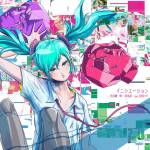 Back in November 2012, the official Hatsune Miku Facebook page announced the release of the promotional video of the song ‘Initiation’ featuring Hatsune Miku. Unfortunately, the video was blocked by Sony Music Japan from outside viewers… Until now, that is.

The full video has been recently discovered on a VEVO channel that allows viewers from outside Japan.

The promotional video was released to advertise the new album release by the producers Keiichiro Shibuya and Hiroki Azuma, which is still available for purchase in in limited edition Blu-ray and DVD versions.

From the animation and music style, the video was clearly made by the same studio responsible for the production of THE END, the four-time sold-out opera performance at the Yamaguchi Center in Japan from December 1st through the 3rd in 2012. The event was so successful, they have announced an additional showing in Shibuya, Tokyo for May 24th, and even a showing in Paris for November 14th.

It’s quite possible that the promotional video is a part of THE END itself, as you can hear a small section of ‘Initiation’ at the end of the official promotional video for THE END. The music video can be best described as intense and mind-bending, and can even seem somewhat confusing at certain points. Enjoy the official video below.

[youtube:http://www.youtube.com/watch?v=dIfLTw3tbE8]
If you regularly enjoy reading our site, consider supporting us on