You know how every Hatsune Miku: Project Diva game to date has had that one “boss” song that is just too difficult to clear compared to the rest of the music set? Thanks to the introduction of the “medley” concept, it looks like Project Diva X will also be adding what has been dubbed the “ultimate medley”. 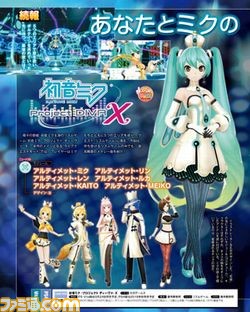 Called  “Shuukyoku no Medley ~Chouzetsu Gikou Bousou Kumikyoku”, the medley will have the “neutral” element, and was arranged by [email protected] himself (yes, the producer responsible for our mental and physical anguish with Project Diva over the years). It will include the following songs:

Modules accompanying the characters for this song, designed by Hidari, were also announced in this update:

Hatsune Miku: Project Diva X launches for the PlayStation Vita in Japan on March 24th, with the PlayStation 4 release due in Fall 2016. You can preorder the Japanese version on CDJapan!

Via Gematsu and Famitsu