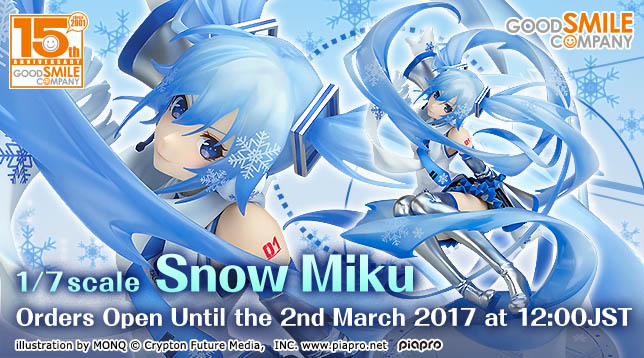 The Snow Miku figure is now open for preorder! The figure is part of the Good Smile Company 15th anniversary, and bases on an original design by MONQ, the official illustrator for Magical Mirai 2015.

The winter songstress speeding through the snow!

The very first scale figure of Snow Miku from Good Smile Company! Snow Miku was designed as a mascot character for Winter in Hokkaido, and this version was illustrated by MONQ in a lovely dynamic pose that has now been carefully converted into a figure with the utmost attention to detail!

Her long, flowing hair makes use of semi-transparent parts for a lovely icy appearance, the snowflake patterns all over the design have been faithfully included, and the sculpt has been carefully tuned to ensure the figure looks great from all sorts of different angles! She has a determined, cool expression on her face with a slight blush on her cheeks and glossy lips that bring out her feminine charm for fans to enjoy in their collection!

Preorders are now available until March 2nd at 12:00 JST. She’s priced at 14,800 yen on Goodsmile’s Online Shop, and is scheduled for release sometime in November  2017. She’s also available for preorder from the following online stores (prices, preorder end dates, and release dates may vary by stores):

Below is a gallery featuring the figure and the official CM! 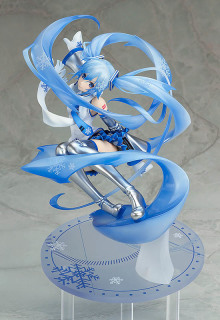 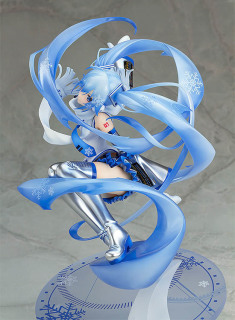 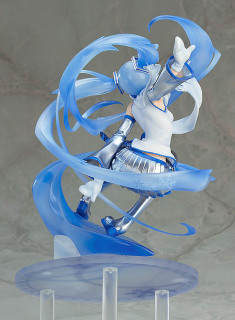 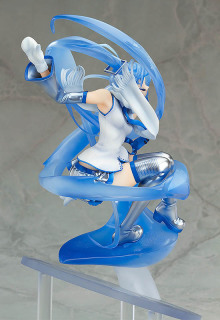 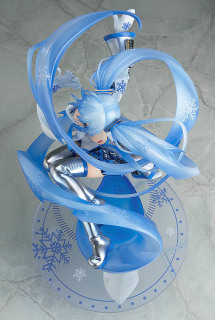 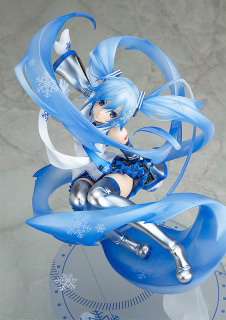 Are you a user of Adobe Photoshop, or Adobe’s Creative Cloud services and products? A newly announced tutorial campaign in collaboration with Hatsune Miku was just announced by Adobe to help with image editing basics and how-to’s.

“Project #1” of the collab features artwork by the popular illustrator zerokichi, and teaches how to give images more perspective through the use of blurring effects. A free download of the PSD is available for this tutorial, along with a free trial of Adobe Photoshop from the links below.

Adobe’s announcement video (below) hints that at least a few more project will be released in this collaboration (likely by TNSK and MONQ), so keep an eye out for it!