The winners of the Hatsune Miku Expo song contest have finally been announced! First up on the list is the grand prize winner, Circus-P for his song “Ten Thousand Stars”! The grand prize includes 30,000 Yen in products from Sonicwire, tickets to a location where the song will be performed, as well as his song being featured at one (or more) of the concerts in North America! 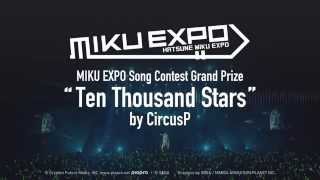 There are also two runner-ups, who have won 20,000 Yen in products from Sonicwire for their contributions. These include “Together, Make The Magic!” by Xyao-Ming, and “Constellation” by ϕrkestrate.

Lastly, there are two honorable mention winners. While there was no prize for getting an honorble mention, they were still note-worthy entries. These honorable mentions include “ALL IS MUSIC!” by YZYX, and “MikuMambo” by AlexTrip Sands.

Congratulations to all music contest participants!