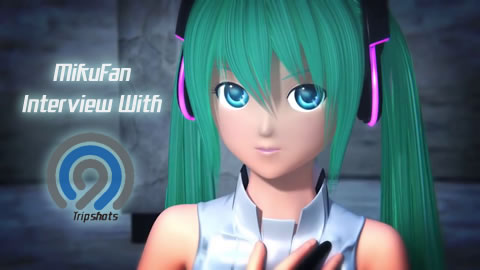 Tripshots is a long standing contributing artist to Vocaloid in both music and outstanding CGI animation work. His animations in particular continued to set new benchmarks for years to follow, and have been widely publicized across the web as representations of what the Vocaloid community creates. For many fans today, works like Nebula or Gift nor Art can be recognized as the video that attracted them to the Vocaloid culture.

An interesting trait of Tripshots’ personality is his openness towards overseas fans of his work, something that we would like to see from many more Vocaloid producers in the future. After Tripshots kindly agreed to our interview request, we proceeded to gather questions from Vocaloid fans from around the world. So we’d like to thank everyone for their contributions! Special thanks to Descent87 for providing translations for the interview.

MikuFan: Good evening, and thank you for accepting! I’ve been a follower of your work for many years. We have also gathered many questions from fans overseas.

Tripshots: I’m truly grateful to have so many fans who are interested in me and my work.

MikuFan: The first question is one that almost everyone would like to know the answer to: How did you discover Vocaloid, and what inspired you to become involved?

Tripshots: The first time I heard about Vocaloid was through a news article. I noticed a name I had never seen before, “Hatsune Miku”. As a Japanese person, seeing a name I had never seen before perked my interested and I read the article. The article basically spoke about how Hatsune Miku was the face of a new vocal synthesizer software that had gained considerable popularity on video sharing sites.

MikuFan: Ahh, I see. (This had happened within a mere couple month of Miku’s software release, her popularity had unexpectedly exploded in Japan)

Tripshots: I had already had some interest in this kind of technology and was already aware of Meiko’s release. However having listened to her demo songs, I felt that she still sounded too mechanical. However when I listened to Hatsune Miku’s demo work, I was truly surprised and excited by the amount of expressiveness in her voice and found myself wanting to try and work with her.

MikuFan: Hatsune Miku’s voice was truly captivating for many people.

Tripshots: I was especially impressed when I heard OSTER Project’s work.

Tripshots: Saying that, I basically mean to say that she was the culprit (joking) who helped drag me into the world of Vocaloid. END_OF_DOCUMENT_TOKEN_TO_BE_REPLACED