Just as a quick heads up: We’re not dead! Just a little inactive on the site while I’m occupied with other things, but I’ve still been actively posting small bits on the Facebook and Twitter pages.

Quite a lot has been going on with the development of Project Diva F for PS3, so hopefully this will help those who are confused or have been out of the loop. Check the full story for the full article. There’s quite a bit to cover.

Remember this from the livestream?

Any serious fans of Project Diva might want to add this Hori Mini-Controller to their collection, as it may be the closest thing to a real Project Diva Arcade experience (or if you’re too lazy to leave home to play one near you). This luxury doesn’t come cheap, though, as the suggested retail price is 9,800 Yen with tax. It can be found for less than that from other online retailers, so be sure to look around. 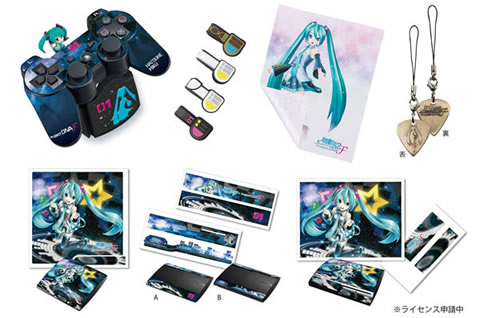 Up next is an entire accessory set from SEGA themselves. The set includes cord clips/ties shaped like the Vocaloids headphones, guitar-pick shaped charms/straps, a dust cloth, stickers and a stand for your controller, and even a cute little Miku figure that attaches to the charge port of your controller.

The coolest accessory, in my opinion, is the set of stickers to decorate the exterior of your console in a Project Diva F theme. It includes stickers for all three styles of PlayStation 3 consoles, so there’s no worries about compatibility. The older your console is, the more room you’ll have to fit even larger designs. What about the other two you don’t need? They’d probably make a nice gift for friends.

The set can be found online from places like CDJapan, Amiami and Amazon Japan. Prices vary anywhere from 3000~4000 Yen, and the set is due to ship on the same day as the game: March 7th. 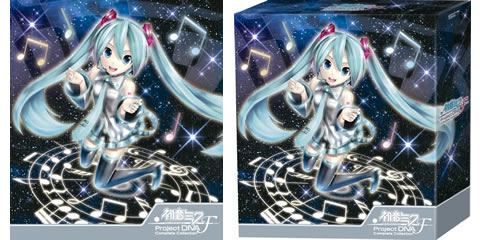 Anyone looking to purchase the soundtrack for the game has two options available. There is a limited edition package that includes two music CDs, a game sound CD, A special Blu-Ray (region free) with bonus video footage (actual footage is unknown at this point), an illustration book and a special card of sorts. Everything comes bundled inside the special box seen in the above image. You can find the set listed on CDJapan, Amiami and Amazon Japan.

The basic set for the soundtrack includes the two music CDs and a DVD (Region-2 encoded) containing the bonus video footage. There is no mention of other bonuses, and the type of packaging is also unknown. This set is also listed on CDJapan, Amiami and Amazon Japan.

PjD ƒ owners will appreciate this.

What if you’re one of those people who wished that your copy of Project Diva f could obtain all these additional features, without the need to buy the PS3 version? Thankfully, SEGA has announced a new DLC pack for PjD ƒ titled “Project DIVA ƒ おおもじパック” (the Japanese can be read as “Upper Case Pack” or “Capital Pack”).

The pack includes all six new songs that are being added to the PS3 version, as well as their respective modules: Tell Your World (Linkage), Tokyo Teddy Bear (Scissors), Dream-Eating Monochrome Baku (Tricker), and Sweet Devil (Honey Whip). “Senbonzakura” will also come with the associated modules for all six Cryptonloids, and the proper Miku+Luka modules for the song “Rin-chan Now!”.

The DLC pack is scheduled for release on March 7th for a rather hefty 3,000 Yen, which is nearly half as much as a digital download of PjD ƒ itself. This is the only option though for those who don’t plan on purchasing the PS3 version of the game, or don’t own a PS3 at all. There is no known end date for the DLC sale.

If you’re one of those people who own a Vita with PjD ƒ (or wanted to get PjD ƒ, explained shortly), and plan on getting Project Diva F for PS3 with the first press bonus, the game will include a special code with benefits for downloading the DLC pack for PjD ƒ on the Vita. After Project Diva F launches, all first press copies of the game will include a code that must be redeemed within 39 days of the launch date.

Use of the code will grant you DLC access to Tell Your World and the Linkage module for PjD ƒ, for free. However, you will still have to pay for the rest of the DLC pack. The code grants access to the pack for a discounted price of 1500 Yen. If you do not yet own a copy of Project Diva ƒ, the code will grant you access to the digital download version for only 5000 Yen (normally 6600 Yen). Sources: Virtual Emotions and SEGA.

SEGA has recently released a video showing some game footage for the song Sweet Devil. The module teased in the second half of the video is the Family Mart module. Check it out below.

An updated version of the storefront trailer for Project Diva F was released, and covers a bit more info compared to the previous trailer. If you can’t understand the video, full clip-by-clip details can be found here. Otherwise, enjoy the video below.

[youtube:https://www.youtube.com/watch?v=TKtMIRwkS8c]
If you regularly enjoy reading our site, consider supporting us on