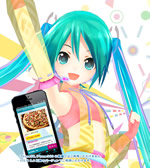 In addition to the previous news announcement, Domino’s Japan has released an all new 3DPV for the start of the Domino’s x Hatsune Miku Summer campaign.

As you probably saw hinted in images of the updated iPhone application, they were including a new augmented reality song titled “Ever Green”. But what I didn’t expect was the release of a full 3DPV from Director Wakamura, a professional animator.

Domino’s has also released a “making of” video, where you can also catch a glimpse of the new pizza box design at the very end (watch it here). They also updated the Miku Domino’s website, where they revealed a nice surprise for the new summer promotion. They have brought back the 34%+5% (39% off) coupon for using the Miku iPhone application to place your order, and it’s usable from July 16th until July 21st, 6X longer than the previous coupon promotion!

[youtube:https://www.youtube.com/watch?v=zeq-IrUC8GA]
If you regularly enjoy reading our site, consider supporting us on