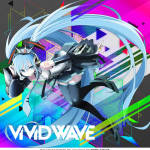 All fans of 8#Prince/HachioujiP should prepare themselves, as his newest album ViViD WAVE is set for launch on July 17th. And from the look of the track list, this will be a must-have on many people’s wish lists.

The normal album will contain 14 tracks, while the limited edition release will include a DVD containing PVs for the songs GAME OVER, Dream Creator, Fake Doll and HORIZON.

The Vocaloids used in this release include GUMI, IA, Miku, Luka, and Kagamine Rin & Len. The track list contains the following songs:

Since two of the songs included on the DVD have not yet had a public video release, you can likely expect to see them uploaded very soon on HachiojiP’s official YouTube channel. Below is the newest music video for the song HORIZON.

[youtube:http://www.youtube.com/watch?v=4jhjgoFv4D4]
If you regularly enjoy reading our site, consider supporting us on