This week’s featured producer likely doesn’t need an introduction to many seasoned fans. After producing a few smash-hit and viral songs, his name is now known by many. From one of the most popular Miku trance songs of all time, to the viral smash hit of 2012, this producer is definitely top-tier. This article will feature the history and works of t.Komine, aka Utata-P.

I’ve timed this in accordance with Utata-P’s guest announcement for Anime Expo 2013, which is 2 weeks away from this day. He will be speaking at a panel along with several other highly notable producers, and I’m sure many will be excited to see him there. So let’s get this under way already!

Utata-P’s earliest majorly successful release in the Vocaloid scene was the song “Stratosphere” on November 24th, 2007. With approximately 513,000 views, it ranks as the second most-viewed Miku Trance song of all time on nicovideo, placing it above Mikuru396’s “Melody…“, but below Hanasoumen-P’s “Unfragment“.

Utata’s next successful piece didn’t come very long after Stratosphere, and fits into roughly the same genre. His remix of “Merry Christmas Mr. Lawrence” combined the styles of Dream Trance and electronica in a very captivating way.

Now here’s a song that deserves a very special mention. “Project Diva desu.” is a track that has been used as the opening piece for Hatsune Miku’s 2010 Thanks Giving Day concert event, and used once again for the same purpose at Mikunopolis in Los Angeles. Thanks to this, it has earned the title of being Miku’s Summoning Song. Utata-P also kindly provides the track for free download on Piapro.

Now we can finally skip to 2012, where t.komine’s biggest release event took place. The song in question is titled “This is the Happiness and Peace of Mind Commitee.”, and took nicovideo by storm. Utata-P was simply not expecting the sudden and explosive reaction to the song. He was completely baffled as to why it happened, as he explained in his interview with VOCALOID YAMAHA. Being extremely catchy and addictive, the song has managed to pull in over 1.8 million views on Nicovideo.

The song also inspired the continuation of what is now called the “Happiness Series”. These include another song featuring Miku titled “A Way to Become Happy Forever“, a very long titled track featuring MAYU, and “I’m Sorry I Love You” featuring IA. 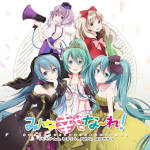 Utata-P’s recent successes in Vocaloid composition allowed him to score his first major album release, titled “Everyone Be Ha~ppy!”, through the record label EXIT TUNES.

The album can be obtained from several online stores (CDJapan, Amazon Japan, etc), and contains 16 tracks of various original songs and remixes composed by Utata-P! Listen to the crossfade here.

Now where can you go if you want to follow this producer’s work more closely? Here’s a few helpful links:

Other Official Links and Info

Likely taking note of the change of music interests among Vocaloid fans, and Japan in general, t.Komine says that he (sadly) has no plans to compose any further music under the genre of Miku Trance. However, you can some very interesting clips on his soundcloud page.

Utata-P has also mentioned that he has special plans this year for people who follow him on his YouTube channel. What are they? You’ll just have to subscribe and see for yourself when it happens. Don’t miss out!

I hope you enjoyed this look into the history of another amazing producer, and feel free to share among friends to help spread the word of t.Komine’s upcoming appearance at Anime Expo 2013!