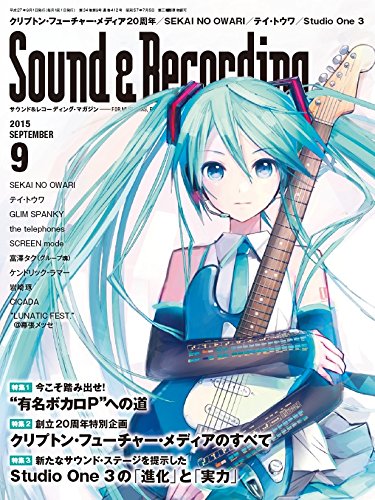 A combination of information from the September edition of Sound and Recording magazine, and tweets from Crypton Future Media’s head of Vocaloid software development, Sasaki Wataru, has revealed new details about the development of Hatsune Miku’s VOCALOID 4 software.

To begin, it looks like Hatsune Miku’s V4 Beta will be publicly released this September, but initially to select members of the Japanese Vocaloid community, most likely some of the more popular Vocaloid producers (this is Crypton’s wording, so don’t confuse it with “open beta”). The goal is to obtain feedback based on user experience, and also use this feedback to further assist in the development of Kagamine Rin and Len V4 (who’s recording phases just ended).

It’s known that Hatsune Miku’s V4 software is being developed largely by reusing some of the master audio from the original Hatsune Miku software (V2), but it goes beyond that. Along with finding new ways to utilize it, there is talk of implementing some of the more popular “append” vocals once again (dark, solid, sweet, etc), but making them work as a single voice bank, similarly to Megurine Luka V4’s EVEC.

The advantage of a single database is of course a wider dynamic range for the singing voice. The goal is to reduce the number of actual “seperate” voice banks down from 6~7, to only 2~3. This is what Crypton will attempt to accomplish with the Hatsune Miku V4 beta, and the results of this testing will be implemented into Rin/Len V4. Hatsune Miku V4’s final release is scheduled to come after.

Lastly, Wataru mentioned interesting experiments with using the Vocalistener plugin (a tool for using human vocals to quickly compose the melody in the Vocaloid editor), and the voice provider for Hatsune Miku, Fujita Saki. Interestingly, when using Miku’s voice provider as input though Vocalistener for the new Hatsune Miku V4 voice bank, it provided a result where the “vowels were more beautiful, and consonants were more clear”. It also retained some of Fujita’s voice characteristics.

It seems that using Vocalistener along with the original Vocaloid’s voice provider will create the best possible output, but such an ideal situation would be impossible for anyone using the software. Vocalistener is infamous (popular, but often disliked) because of its ability to provide more colorful pitch bending. But it’s Miku’s “flat” tone that played a part in her popularity, and makes her suitable for music genres such as trance.

“We should not change that, nor should we try making Miku’s voice just like her’s (Fujita’s). So what should we do at next? -> try to Append it” says Wataru. What exactly does this mean? We’re not sure, but we’ll probably see later as Miku’s software development progresses.