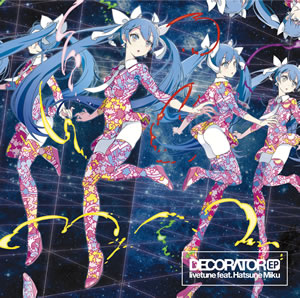 Some of you may have been waiting in anticipation for the release of Livetune‘s latest album, and thankfully, a short February helped this day come a little faster.

The album ‘DECORATOR‘ officially releases tomorrow on March 5th, but people who ordered from Amazon Japan may find that their copies shipped a day early. Many fans in Japan are reportedly already receiving their copies ahead of schedule.

The album comes in a regular edition CD version, as well as a limited edition CD+DVD version. International shipping is available on both.

Below is the official promotional video for DECORATOR, which was a collaboration between Director Wakamura and SEGA.

[youtube:http://www.youtube.com/watch?v=zweVJrnE1uY]
If you regularly enjoy reading our site, consider supporting us on