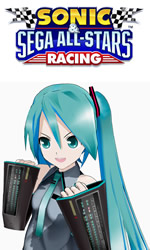 Thanks to overwhelming community support, Hatsune Miku has scored a victory and made it to the second stage of voting for chance as a DLC character for SEGA’s upcoming racing game, Sonic & SEGA All Stars Racing Transformed.

Voting from the last poll has ended two days earlier than expected, and the second stage of voting is now open. To cast your vote, you simply need to sign the following petition.

Miku needs to achieve at least 1,000 signatures by December 1st to have a chance at a final victory. But don’t stop there! The more, the better! If you’d like to see Miku appear in the game, cast your vote! Lastly, be sure to vote for 2 of your other characters as well.

EDIT: Here’s an interesting message from one of the administrators.

Aside from anything else, until you can make a petition and prove 20,000 unique user votes, you’ll have a hard time convincing us or SEGA there is sufficient enough demand for any given character.