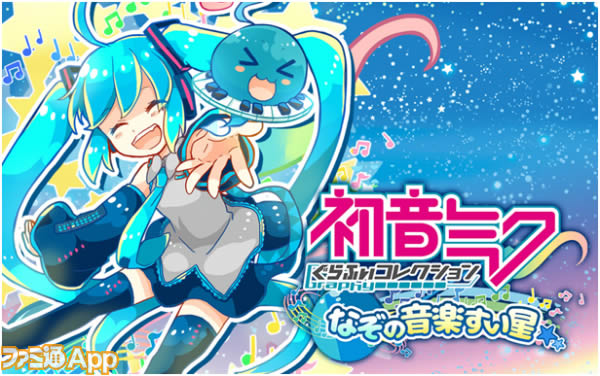 Hatsune Miku Graphy Collection Mystery Music Comet or, in short, “MikuColle”, is a card game RPG developed by Crypton Future Media. The app runs with a plot where a sudden appearance of mysterious music note-shaped comet causes all sound in the world to be lost. You and Miku will advance together on a remarkable journey to redeem the lost sound. Taiwan and global releases have been announced to come after the release in Japan in late September this year.

Players will advance through stages to collect the lost songs. The background music in the game will be uncompleted at first (due to the mysterious music comet). Players will face “Cards Battle” against monsters during the journey in order to collect lost notes and proceed further on. As you continue to collect more notes in the stage, the faint background music will slowly become completed.

Players will be equipped with a deck of illustrations as weapons against monsters. Illustration cards all vary in terms of power and illustrators. This is a concept derived from the currently existing mobile app from Crypton Future Media named “Hatsune Miku Graphy Collection”, and this game is a sequel/upgrade to the existing app.

The app supports Android and iOS devices running on Android 4.0 and iOS 7.0 or above. Visit the official website here: http://www.crypton.co.jp/mikucolle_app/index_pc.php