My visit to AX this year was seemingly less exciting this year compared to previous years (now having attended for 5 years), largely in part to the notable lack on Vocaloid and Hatsune Miku content to enjoy (the primary focus of this site, of course). That being said, I tried to cover as much of the event as I physically could by myself. This is my experiences and impressions of AX 2015, and Gallery Nucleus.

Day 1 of Anime Expo (July 2nd) started off the way it usually does every year: Cramming the South Lobby of the Los Angeles convention center with thousands of event goers while we wait for the Exhibition Hall to open. This year, I was hosting a prize giveaway of Hatsune Miku goods to fans who were able to find me and correctly answer quiz questions. I’m happy to say that nearly all prizes had been awarded during the event!

Look for this parasol to find me! I'm near this location. pic.twitter.com/EnUnviIMm1

The first immediate plan was to visit the official IA exhibitor booth (tables 70 & 71), and then gather three stickers from participating vendor booths for the Gallery Nucleus scavenger hunt event. Both were acheived with ease. Finally, I also went to visit the official VOLKS booth (tables 251 & 350) to see the Hatsune Miku Dollfie Dream and Snow Miku dollfie dream figures on display. The staff managing the booth were very friendly and happy to meet the MikuFan.com staff.

After finishing the exhibition hall for the day, I started heading off to Gallery Nucleus with friends to catch the early screening of Hatsune Miku Expo in New York, and the public opening of the gallery. The screening event was very fun! We also got to enjoy some live glow stick dancing from @hightrancesea of Vocaloidism towards the end of the event. Before the gallery opening, there was a final rock-paper-scissors game to give away prizes, which I failed spectacularly.

There were roughly 60 different artworks on display at the gallery, with the majority being newly drawn exclusively for the gallery. Compared to the typical Hatsune Miku works I’m used to seeing, there was definitely a much wider variety of interesting and sometimes strange takes on Hatsune Miku’s character from the various illustrators.

We have nothing to report for this day in regards to Anime Expo, since we missed the official IA/Kagerou Project panel. This was due to misinformation from event staff outside the room an hour before the panel was due to start. We deeply apologize for not having coverage of this panel.

The usual Vocaloid cosplay gathering was held outside the West Hall entrance of the convention center, and we managed to capture this shot of everyone together. Thank you to everyone that participated!

Attending the live IA concert at Club Nokia was easily the biggest highlight of my trip to Anime Expo. As IA’s first live performance in the U.S., it attracted various interested people, including some that had never heard of her before. Many I met that were already fans amusingly did not know how her name was pronounced.

With IA admittedly being my second favorite Vocaloid after Hatsune Miku herself, I was very excited to see what her live performance would be like. It was surprisingly very much like the Hatsune Miku live concert events I had seen in the past, with the way the performance was arranged. The live band, communication with the audience, band member introductions, and even the live backup dancers made for a very fun and exciting experience.

I’d be very happy to see such an event in the U.S. again, and I look forward to what 1st Place has planned for the future. Below are photos and a video of the opening song that I shot under press permissions from Anime Expo, Club Nokia and the concert event staff. Enjoy! 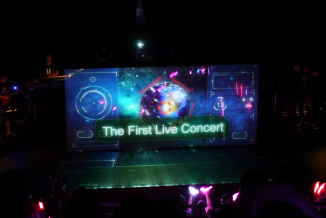 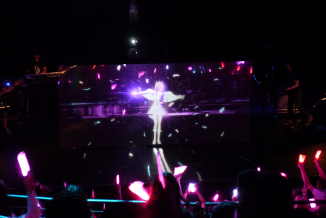 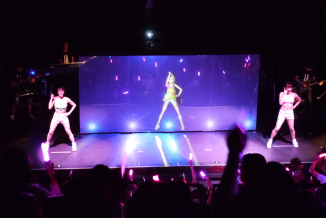 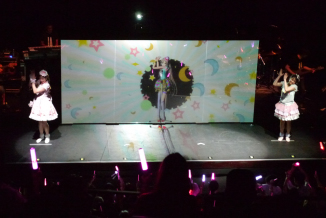