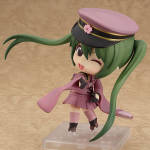 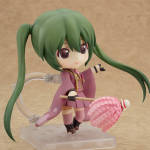 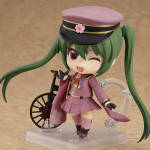 The anticipation and long wait is finally over, as Nendoroid Hatsune Miku: Senbonzakura ver. is now available for preorder. Based on the hugely popular Hatsune Miku song uploaded in 2011, the song has garnered over 8 million views on Nicovideo, and was Japan’s #1 ranked karaoke song for much of 2013. So you could say the release of a nendoroid is long overdue.

Included with the nendoroid are two face plates for a winking and smiling expression, a cherry-blossom streamer, and the bicycle from the original music video. The MSRP for the nendoroid is 4200 Yen ($35) with tax. However, Good Smile Company will not be selling the nendoroid overseas directly from their own online shop. Instead, they plan to offer the nendoroid at upcoming events.

The good news is that the nendoroid can still be ordered overseas from various online retailers. Below is a list of a few reputable sites, so take your pick!

The expected shipment period is announced for May 2015. Be sure to check out the full figure photo galleries from GSC’s product page, and Kahotan’s figure review. Haven’t seen the official music video yet? Watch below!