SEGA has launched a new webpage dedicated to information on the next Project Diva game arriving on the PS Vita this August. Curiously enough, the game goes with the simple title of “Project Diva F”. There is certainly a much deeper meaning to this title that I’m unaware of, but I do have some ideas (F is the 6th letter of the alphabet, and this is the 6th PjD game launched on a Sony platform).

EDIT: A comment from PSEUDO SAMMY – ““f” is also a dynamic sign in music meaning “forte”, that is “loud” or “strong”. It indicates or calls for loudness, or an increase in volume. And judging by the design of the f in the logo, which exactly resembles how it appears as a musical notation, I’m willing to bet that’s part of it.”. Thanks for the info!

There is a lot to cover on this one visually, so please check the full story for more info!

At first glance to the untrained eye, it may seem like there hasn’t been much improvement to the character models over the older PSP games, but there has. The polygon count, texture detail, model movement, and expressions have all had a large improvement thanks to the PS Vita’s superior hardware. Further more, far more characters can be on screen at a single time. And on the topic of models, images of 5 modules thus far has been released. A few should be instantly recognizable from the teaser videos, but a couple are also quite new. 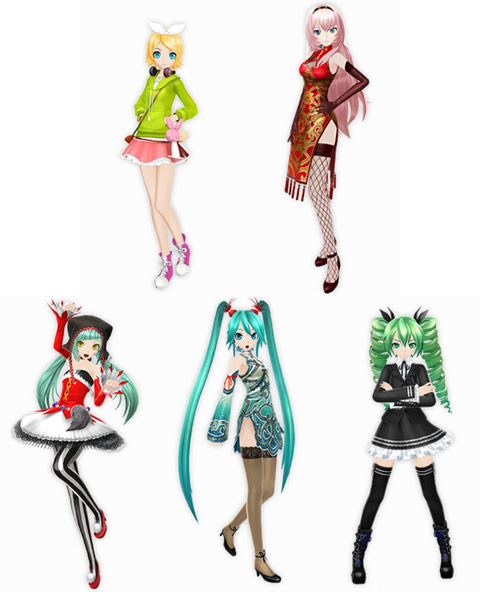 The game mechanics, for the most part, are quite similar to the older project diva games. But there are some twists to the style thanks to new features added by the PS Vita. Most notable is the touch screen capabilities. If I’m reading correctly, the star symbols or “notes” are pressed by tapping the screen at the correct time. The chance time mechanic has also appeared to have some slight changes, although I’m unclear as to what the exact changes are.

The score result screen has also had a major change, and now shows a graph to clearly indicate your level of performance throughout the song. It can show you where you exactly where you made mistakes, enabling you to correct them and watch your skills improve through the results on the graph.

Lastly, a much hyped feature is the augmented reality application that comes with the game, allowing Hatsune Miku (and possibly the other characters) to interact with the world around you through the camera of the PS Vita. I’m unsure of what the limitations would be, or how this function exactly works. But it looks to be pretty damn interesting.

The augmented reality app at work! 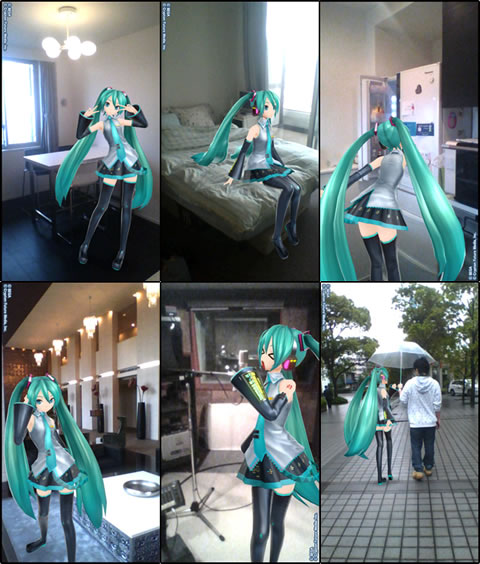 There isn’t much released in terms of music other than what we’ve seen before, so it would be simpler to simply check the official site and head over to the songs section. If you want to check out the website yourself to see more images and details, then just click the banner at the top. Alternatively, you can click here.

The game is still scheduled for an August 30th launch, and SEGA will be releasing more updates and information on the website as the launch date approaches. So be sure to keep checking back on their site for more images and news!