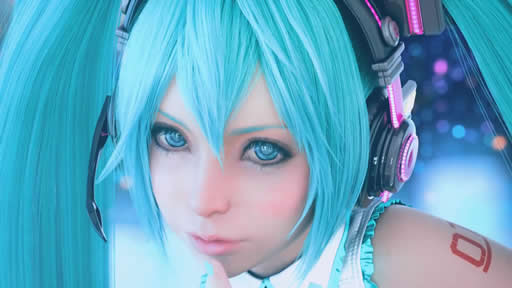 I think it is fair to say that everyone and their mother has already heard about the video of Hatsune Miku, created in collaboration with Tetsuya Nomura from Square Enix, especially after the video found its way onto the official Hatsune Miku YouTube channel.

I saw the video in person for the first time at Miku Expo Los Angeles, where they featured the clip inside the Nokia Theater before the start of the concert. It was also featured on the billboard outside Wallplay at Miku Expo in New York.

As cool as it was, it didn’t catch my interest too much due to not being a player of Final Fantasy, and the “Hyper Realism” Hatsune Miku stuff has never been my personal cup of tea. But I’m sure a lot of fans must have questions going through their minds.

“Tetsuya is making a game with Hatsune Miku?!”
“Does this mean we’ll see Miku in Final Fantasy/Kingdom Hearts?”

These are some of the questions I’ve seen, and it’s the topic I’d like to cover. To start, Tetsuya’s game projects are completely booked… For the next 5 years. While Tetsuya has expressed his interest in creating a game featuring Hatsune Miku, it is merely an interest. It may be extremely difficult to plan for something so far off, especially due to the unpredictable nature of Hatsune Miku’s growth (will she even still be popular after 2019? etc).

However, cameos in other games require far less time and effort to implement, and seeing Hatsune Miku appear in another game, whether it be Final Fantasy, Kingdom Hearts, etc, could very well be a possibility.

For now, this collaboration seems to have been a one shot gig specifically for giving Miku Expo New York and Los Angeles that extra bit of “wow” factor, and there are no additional collaboration plans at this time. The official video can be seen below.