Continuing tradition from last week, this week’s obscure channel promotion is aimed at Dixie Flatline, a producer who captured Vocaloid fans around the world with his emotional music.

Dixie Flatline was first noticed by the vocaloid community after the release of his first song, Gemini, back in March of 2008. The excellent use of the Kagamine twins made his first song an instant success. But things didn’t stop there. Just a little over a year later, he released his most notable song to date: Just be Friends featuring Megurine Luka. The most popular print on youtube for this song has raked in over 5 million hits, and his song is also a popular choice in official concerts.

I also got to enjoy the song in concert myself at Mikunopolis. In fact, if you own the DVD or Blu-Ray of the performance, you’ll be able to see me standing and clapping along with the song. The image below is a shot taken by Tokiko during a network broadcast of the Mikunopolis concert.

Tokiko spotted me in the audience of Mikunopolis during the song “Just be Friends”. Click the image to read the full article. 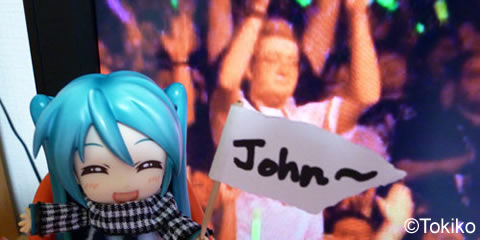 Of course, we’re here promote the official pages of Dixie Flatline. So without further interruption…

Dixie’s channel was first revealed after he showed the premier of his new song, “Answer“, at Anime Expo 2012. The song serves as the successor to the previous story, “Just be Friends”. The video below is the official print for the song directly from his own channel. As always, if you love this producer and appreciate his work, please share this article to help promote and support him directly.