On September 24, 2015, the Vocaloid community mourned the loss of samfree.

Best known for the infectious Eurobeat track “Luka Luka Night Fever,” samfree was one of the first Vocaloid producers, creating tracks in the genre’s early days and rising to prominence within the Japanese community and later, the international community.  Five years after his passing, his works retain their popularity and continue to inspire new generations of Vocaloid producers and fans.  While most fans know him for “Luka Luka Night Fever,” samfree’s work encompassed more than this one smash hit.

Sano Takayuki was born on September 9, 1984, in Niigata, the capital city of Niigata, Japan.  He uploaded his first Vocaloid track, “Daybreak,” to Nico Nico Douga on November 11, 2007, less than 3 months after Crypton Future Media first released the Vocaloid software for Hatsune Miku.  The lyrics speak of wandering through darkness in search of the light, a light that will always come at daybreak.  While the 1:56 track has garnered a mere 15,302 views over the past 13 years, it was the start of many things to come for the young producer.

He rounded out 2007 with 7 more tracks: Tender Wind, Daybreak -Full ver-, 桜のような恋でした (It Was A Cherry-Blossom-Like Love), 君のメロディー (Your Melody), CHAIN, Daybreak (Kagamine Rin Version), and Daybreak (Kagamine Len Version).  Of these 7 tracks, the full version of “Daybreak” featuring Hatsune Miku became his most popular track of 2007, clocking in at 482,471 views as of the writing of this article.

In the span of 8 years, samfree uploaded a grand total of 65 Vocaloid tracks to Nico Nico Douga, averaging close to 2 tracks per month.  While most of the tracks are his original works and remixes sung by Vocaloids, some feature samfree himself and others singing along to Vocaloid tracks from other producers such as kz-livetune and Dixie Flatline.  His most popular tracks comprise the “Night” series: Luka Luka Night Fever, Tako Luka Maguro Fever, Megu Megu Fire Endless Night, Miki Miki Romantic Night, and others.  By far, “Luka Luka Night Fever” is his most popular track to date, clocking in at almost 5 million views as of the writing of this article.  Uploaded on February 12, 2009, it is widely regarded as one of Megurine Luka’s unofficial theme songs.

The final Vocaloid track samfree uploaded to Nico Nico Douga was “Mind Voice,” featuring IA, debuting on August 21, 2015.  It is believed that samfree composed this track knowing that he did not have much time left in this world and that the most important thing is to never give up.  As the track’s lyrics say, “What you have to go on is what lies in your heart.”  To date, “Mind Voice” clocks in at 260,591 views, with many comments from users around the world expressing their condolences upon his sudden passing just over one month later, at the young age of 31.

While Sano Takayuki’s life was cut short too soon, his contributions to the Vocaloid community are many, and perhaps both his well-known and lesser-known works will inspire others in 2020 and beyond.

September 25th marks the 13th anniversary of the Vocaloid track “Packaged” by livetune.

This was the first Vocaloid track kz ever uploaded onto the Internet, beginning what has become a long and prosperous music production career.  While kz had been creating remixes of various tracks under the name RE:NDZ before the release of “Packaged,” this track was what first put him on the map.  Today, kz is one of the most recognized Vocaloid producers in the world and has left his mark in various other genres, from anime OPs to mainstream EDM.

Initially uploaded as a test video a few days earlier, “Packaged” was first uploaded to Nico Nico Douga on September 25, 2007, less than a month after Crypton Future Media first released the Vocaloid software for Hatsune Miku.  The track also made its way to the now-defunct music sharing site Muzie.  “Packaged” would become the title track of livetune’s first Vocaloid album, Re:package, released on August 27, 2008, with the record label Victor Entertainment.  This is significant because Re:package was the first Vocaloid album ever released by a major record label.  At the time, livetune originally consisted of 2 members, kz and Kajuki P, before the latter left livetune and ultimately retired from the Vocaloid scene in August 2008, shortly after the release of Re:package.  “Packaged” has been remixed and re-released several times since, including:

As of the writing of this article, the Nico Nico Douga upload of “Packaged” has been viewed 2,272,621 times with 115 comments.  It peaked at rank #7 in the “Musics” category and ranks in the top 10 for “Original Miku Song.”  A few years after starting a YouTube account, kz uploaded “Packaged” there on December 15, 2011, where it has racked up an additional 391,314 views.  While it is not quite as popular and well-known as kz’s later works and the works of other well-known Vocaloid producers, “Packaged” was the first spark that began kz’s journey to become the music production powerhouse he is today and paved the way for other aspiring Vocaloid producers to follow. 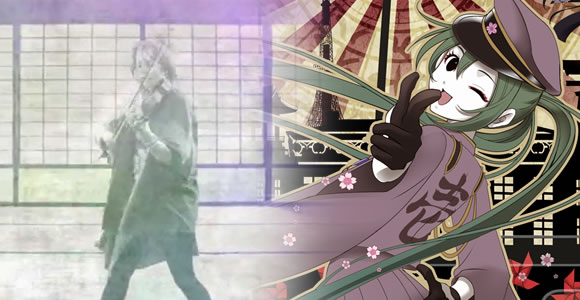 Illustration by 一斗まる on Pixiv

When a world-class violinist meets one of the most popular Hatsune Miku original songs of all time, what do you get? An impressive violin cover of Senbonzakura by Lindsey Stirling.

With over 6 million YouTube followers Worldwide, Lindsey’s prowess in music and performing arts is well known, and the cover of Senbonzakura comes as a surprise to many. Senbonzakura is one of the most iconic Hatsune Miku original songs created, and was even the #1 karaoke song in Japan for much of 2013 and 2014.

You can watch these two music styles blend together in the official music video below. (日本からの視聴の場合は、こちらの動画をご覧ください。 http://youtu.be/npRzWILbKmQ)

The Vocaloid community is full of all kinds of artistic talent, as demonstrated by the countless number of music writers, composers and illustrators. But then we have the group of producers who take on the task of combining all of these works, and bringing them to life in a way that’s hard to visualize with a song and illustration alone. These people are the animation producers, and they have what is arguably the hardest task when it comes to content creation in the community.

This Producer of the Week article will focus on BrotherP and his creations. While there are other high profile animation producers like Director Wakamura that excel at the creation of eye popping visuals, BrotherP has an equally impressive talent for creating immersive and emotionally touching stories with his animations. END_OF_DOCUMENT_TOKEN_TO_BE_REPLACED

This edition of the Producer of the Week review will feature a producer that focuses his music style on electronica. More specifically, the trance genre of music. Due to the constantly shifting attention and interests of the music market, and the huge popularity of Rock and Pop, the electronic side is often overlooked despite having some amazing sounding music. Aura Qualic continues to challenge this shift with his own unique styles. END_OF_DOCUMENT_TOKEN_TO_BE_REPLACED