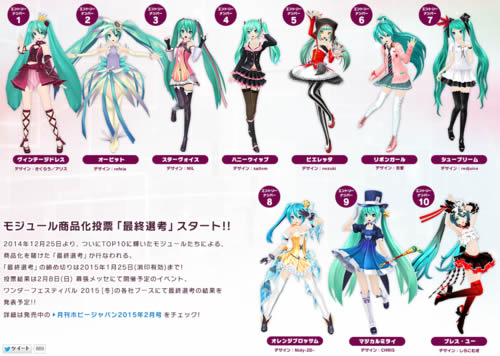 The final round for the next “Real Action Heroes: Hatsune Miku -Project Diva-” begins today, along with the reveal of the top 10 designs from the first round. The second round, however, will take place via the February 2015 issue of “Hobby Japan”. That means voting for this round is limited to Japan only.

The voting process is believed to be completed via postcards, while details will be revealed soon in the February 2015 issue of Hobby Japan magazine, which released today. Here are the names of the top 10 modules in English, in order of the highest number of votes: Vintage Dress, Orbit, Star Voice, Honey Whip, Pierretta, Ribbon Girl, Supreme, Orange Blossom, Magical Mirai, and Bless You.

The winning design will be announced by SEGA and Medicom Toy Factory at the 2015 Winter Wonder Festival event on February 8th, 2015. Visit the official event page here: http://miku.sega.jp/rah2nd/

You can read the details of the previous voting event from our previous article.