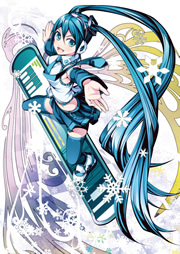 The Top Tens, a community voting site, has recently opened up an online poll that allows users to vote on the singers they would like to see perform at the 2012 Olympic games (hypothetical of course). Most surprisingly, Hatsune Miku has shown up on the list!

In a matter of 12 hours, she’s moved from rank #91 to rank #39. If you want to take a look and cast a vote for yourself, you can do so here. This is a perfect opportunity to attract publicity from online readers.

Getting her into the top 10 will be difficult, but we’ll see what happens!

EDIT 1/13/2012 10:09PM: After a few message exchanges with the admins on their message board, Miku has been added back to the site!

If you wish to read the other edits to get an idea of what happened earlier, read the entire post.

Below is the previous edits from throughout the day.

Because Hatsune Miku is not a person, we felt it was not appropriate for the list.

******
I’ve been monitoring the top 10 list quite actively over the past 24 hours, and I just noticed “Hatsune Miku” vanish from the list 40 minutes ago, after achieving rank #22.

I’ve waited a bit to see if it was perhaps some sort of glitch, but that doesn’t seem to be the case. Is there any particular reason why the name was removed from the list?

This comes somewhat as a shock as many of the artists listed on the top 100 don’t even sing any lyrics at all. Yet they are quick to eliminate her from the list simply because they view her as nothing more than a tool? If you wish to contact them about the matter to help revise their decision, you can contact them by using this contact form.

Even though it’s likely that the voting isn’t used for official purposes, the response from the admins was rather self contradictory. The list cannot truly represent the interests of the internet community if the site admins are free to remove any entry at will.