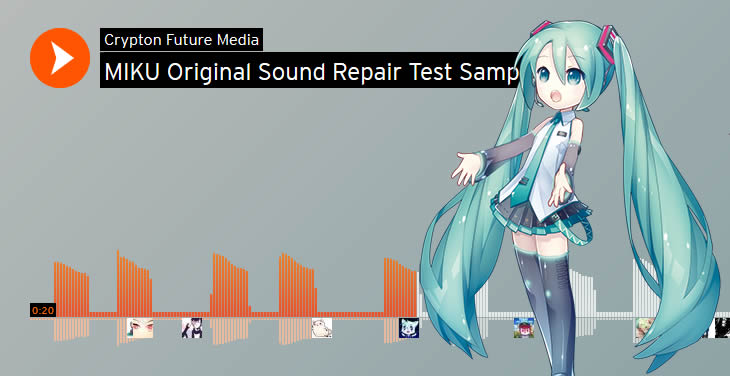 Crypton Future Media posted a surprised news update earlier today on the blog of their music software distribution site, Sonicwire. We were finally treated to details of Hatsune Miku’s VOCALOID 4 software development, along with an audio sample showing the “before and after” of improved vowel sounds.

The blog post states the following changes are in development for Hatsune Miku V4:

> E.V.E.C Support
(*About 2~3 variations of voice colors, but specification of Voice Release is not finalized)
> With standard editor, vocals refined for ranges lower than D3, and higher than C4.
> Adjust/refine some phonemes that have some high-fequency loss, or don’t end properly.
> Add more consonants: Consonant continuation, [br] phoneme refine, and many more adjustments.
> Add Growl voice.

A tweet by crypton_wat on twtter stated: “We’re analyzing and making a comparison between Fujita’s voice and Miku’s voice with the same conditions, since there’s no harm in trying it. Vocaloids tend to be worse with lower pitches. So we focused on that and compared the frequency characteristics, etc. Then we’re trying to revise the sounds to make them clearer”.

Below is the audio sample from Crypton Future Media’s soundcloud, showing the old and new vocals for the vowels “ta”, “ni”, “fu”, “re”, and “ko”.