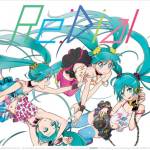 Livetune has just recently released a short teaser of the promotional video for “Redial”, the feature song for his upcoming album titled “Re:Dial” which is scheduled for a March 20th release.

At just 15 seconds in length, you don’t get to see or hear very much. But what fans do see and hear is likely to drive them to want more.

Re:Dial is an album containing many of livetune’s most memorable releases from the past 5 years, as well as a few special album edit versions. Among these are ‘Tell Your World’, ‘Yellow’, ‘Light Song’, ‘Last Night, Good Night’, ‘Weekender Girl’ and more. A recent info update has revealed the 15th (and last) track of the album to be an English version of Tell Your World!

Fans who want a little more excitement can go for the CD+DVD set, which will include four videos for four different songs. The three revealed so far are ‘Tell Your World’, ‘Weekender Girl’ and ‘Last Night, Good Night’. The 4th video is still unknown (I suspect it might be the full length PV for Redial).

The CD-only and CD+DVD versions are priced at 2500 and 3500 JPY, respectively. But they can be easily found for less from several sites with international shipping. The single for Redial is scheduled for a release on iTunes on the same date, but hopefully the full track list will be available as well.

Now that that’s finally out of the way, enjoy the teaser below! The music is composed by livetune, while the PV is being directed by Murakami Takashi from Kaikai Kiki Co.

They’re really pushing the cuteness meter with that ahoge.
[youtube:http://www.youtube.com/watch?v=MEAz8sNak68]