For those fans who simply cannot get enough of live Hatsune Miku concerts, this next Blu-Ray release will help scratch that itch for seeing the twin-tailed diva in action. Titled “HATSUNE Appearance”, the disk will feature the performances seen at the Yokohama Hakkeijima Sea Paradise Amusement Park, performed using the Appearance Miku model created by Mamama. During the event, the entire park was transformed into a “Hatsune Miku World” with various Vocaloid-themed artworks and attractions.

The disk will include all 5 songs that were played during each performance: Packaged, Chaining Intention, Senbonzakura, Tell Your World, and ZIGG-ZAGG. It will also come in two variants: A standard Blu-ray only release, and a limited edition release that also include an illustration book featuring 24 pages of artwork from Mamama himself (and possibly others). Also mentioned is the inclusion of “special goods”, the description of which is unknown. 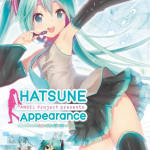 The sets can be found at online retailers such as CDJapan, Amiami and Amazon Japan, but they appear to be selling out quite quickly, particularly with the limited edition version.

While there is no video of the event in action, there is a short preview of some of the equipment testing at Yokohama before the event began. It was much livelier with a crowd. The clip is available below.

[youtube:http://www.youtube.com/watch?v=SXceZt23O9g]
If you regularly enjoy reading our site, consider supporting us on