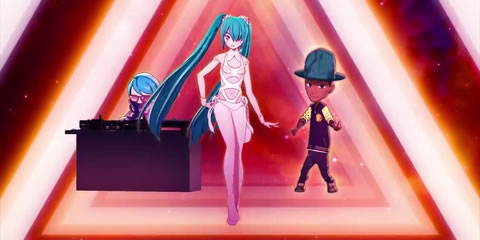 Since I’m a bit late on reporting this trending topic in a news post, I felt I would instead give my own personal impression on what I thought of the recent music video for Pharrel Williams’ remix of Last Night, Good Night (Re:Dialed) by kz(livetune). If you have not yet heard of it yourself, check out the video below before reading so that you will have an uninfluenced opinion.

Now, outside of knowing his name and what he does in the Western music industry, I personally did not know much else about Pharrell. Primarily since I do not follow or listen to much Western music. It is not out or hate or distaste, but rather a personal preference. So you can say that I am hearing and seeing this from an uninfluenced point of view.

Of course, when I hear people speak of Pharrell Williams, he is spoken of as an “A-class producer”, so there was of course some surprise and expectation when I saw the title of the music video. After listening, however, I can’t help but feel a little disappointed by the sheer simplicity of the remix.

I’m by no means a music producer, but I do communicate with other Vocaloid music producers on a regular basis to promote music, and I have a decent understanding of music production methods and styles. I’m not too sure what it was I was expecting, but when I think “A-class producer”, I don’t think of a repeated drum loop with a single synth cord progression. Oh, and don’t forget the looped breathing sounds. The sense of deep emotion from the original song feels completely absent.

As a result, the remix comes off as feeling lazy, or at the very least rushed or incomplete. The most exciting part of the music video was the video itself, which surprised me by featuring visual art from the studio of Takashi Murakami. This is the same visual artist and studio responsible for the creation of the Redial PV last year.

We get to enjoy the same Hatsune Miku from the Redial PV in a different outfit, along with the 3DCG personification of kz(livetune), Kurage-bo from the movie “Mememe no Kurage“, and Takashi Murakami himself. The overall theme and art style of the video was visually exciting, as expected by work from Takashi, but it also felt a bit confusing in comparison to the song’s original video.

The feedback from Vocaloid fans in the west has been mixed, with some people praising it, and others quick to say that Pharrell has ruined what was otherwise a beautiful song. Some even go as far as to say that Hatsune Miku should be kept away from high profile western musicians altogether, for fear of the publicity “tarnishing her image”. I, however, will remain neutral and continue to see how the interaction between Vocaloid and Western music artists plays out. It was just last month that Lady Gaga’s North American tour with Hatsune Miku was announced, and now this. The future possibilities and outcomes for Vocaloid’s expansion in the West are endless and unpredictable, and seemingly inevitable.

As for you, what do you think? Did you enjoy or dislike the music video? How do you feel about high profile Western music artists collaborating with Hatsune Miku and Japanese producers, or even creating their own original Vocaloid songs?

As a final note, the Pharrell Williams remix of Last Night, Good night is up on iTunes and AmazonMP3, if it is something you wish to have in your collection.