The Hatsune Miku V3 (Japanese) software is scheduled for launch on September 26th for Windows and Mac, and will include the 5 previously suspected voice banks: Original, Dark, Soft, Sweet and Solid. The product price is set at 16,800 Yen (or only 12,600 Yen for registered users of Miku V2), and includes the following production software: Piapro Studio (vocal editor), Studio One Piapro Edition (DAW) and PreSonus (sound resources).

The Hatsune Miku V3 (English) software is scheduled for launch on August 31st for Windows and Mac, and will be a single voice bank. The digital download price is set at $149 USD, and is available for purchase in many regions. The boxed-version details are still to be announced. It will include the same editing and production software as the Japanese counterpart. 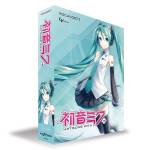 Additionally, a 3rd software package has been announced, and will bundle Miku V3 (Japanese) and Miku V3 (English) in the same package. The scheduled release is set for September 26th. The cost for the bundle is 21,000 Yen (or only 15,750 Yen for registered users of Miku V2), which offers a nice discount over buying the two products separately. It will include the same editing and production suites as the two previous software packages.

Lastly, an information email was sent to registered users of Hatsune Miku’s V2 software, which details a special offer to provide V3 (Japanese) versions of Miku’s Light and Vivid voice banks. This offer seems to be exclusive to owners of the previous Hatsune Miku Append V2 software.