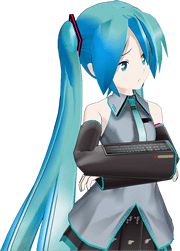 Despite the success of my message regarding the “Save Miku” movement reaching hundreds of thousands of fans around the world, there’s still something that a lot of the fans want: An official word from Crypton themselves. This is understandable, so Scott from Mikustar.com and myself have both sent messages to Crypton to ask for confirmation on the matter. We have both received the same response via email.

“Regarding SAVE MIKU Movement, the deletion problem has been almost solved and we have nothing to announce so far.”

Now, before you jump to conclusions, this can mean a lot of things. Due to how this was a global issue that had to deal with individual country’s copyright laws, it’s possible that there has been a lot of communication and paperwork done over this. These things take a lot of time, even if the initial problem of the false claims has been stopped. I’ve yet to see any new videos vanish from my own playlists for some time now, so it’s now likely that they could simply be working to finish things up.

Crypton has the intention of making an announcement once everything has been settled. So keep cool and keep and eye out for that, and stay tuned!