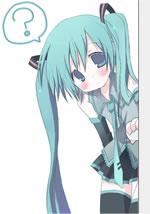 I know I’m not the only one who has been following the news of English Miku’s development since nearly day 1. I was just one out of 39,389 other people who also cast their vote for the English Miku campaign by liking Hatsune Miku’s Facebook page after the announcement at the 2010 New York Comic Con.

So I know I can’t be the only one who has noticed that something very wrong has been going on since the release of English Miku’s first public beta demo at NYCC2011. Since that first demo, the vocals we’ve been hearing in newer songs using English Miku’s beta voice bank seem to be getting progressively worse.

In case you haven’t heard yet, the demo for the English version of livetune’s Tell Your World from the album Re:Dial is now available for preview on iTunes. This is just one more track to add to the growing library of songs that use English Miku’s beta voice bank. Among some of these songs are NICE AGE, DAY TRIPPER, and livetune’s other recent English release, a remix of ZEDD’s Spectrum featuring Hatsune Miku.

While different, all the songs share one very common trait: They all sound much less comprehensible and more “nasal-y” compared to English Miku’s very first NYCC2011 demo. So what exactly is going on here? Has Crypton’s later developments of the voice bank really altered Miku’s voice to the point where it’s no longer recognizable? I don’t think so.

The problem lies in the decision of the producers to tune or alter Miku’s vocals to “suit” the needs of the song. This becomes vary apparent in the English version of Tell Your World, which has a completely different vocal type compared to the original song. The original is very widely known and considered by some to be “the best song that represents Miku and the community behind her”. There is no doubt that many fans will take notice of the drastic vocal change.

The vocal tuning also has one other negative side effect. The original demo at the NYCC2011 was still based on the older Vocaloid2 engine, not long before the project was dropped to start fresh with the Vocaloid3 engine. Even so, the demo kept Miku’s vocals clear and virtually untouched. This was the first (and only) time we were able to hear English Miku in her “pure” form. All demos afterwards by have been on the Vocaloid3 engine, but heavily tuned. Because of this, the fans have absolutely no idea what English Miku really sounds like at this point, and are also unable to tell what kind of progress Crypton has made in the quality of the voice bank since the first public demo.

Is the tuning necessary because the voice bank is in English? Absolutely not. As the NYCC2011 demo and even Kaito’s recent V3 release has shown, it is entirely possible to have the Vocaloid’s voice sound the same as the original, even when having them sing in a completely different language.

In a recent video interview with Hirasawa Eiji, the composer of Miku’s very first Japanese demo song Hoshi No Kakera, he made this comment regarding Miku’s vocals:

“My first impression of Miku was that she could sing very naturally, so I wanted to make Miku sing delicate above all else. Rather than making Miku sing with an up-tempo tune, I made her sing slowly so that her vocal sounded more beautiful”.

Until that time finally comes, I will continue to look back at the outdated demo and try to imagine what kind of progress has been made over the past couple years. It’s the closest thing we have at this point to hearing Miku’s English voice bank in it’s original unaltered state.

[youtube:http://www.youtube.com/watch?v=BOKjpt_lJRU]
If you regularly enjoy reading our site, consider supporting us on